Can It Happen Here? Authoritarianism in America

By Cass R. Sunstein, editor
A thought-provoking collection of essays that asks where the United States is heading.

Given widespread fears in the wake of Donald Trump's victory in the 2016 election, many Americans are anxious that the President or those around him might take us down the road to making the United States a totalitarian country. What would America look like after the dismantling of our democratic structures? We can be thankful to the creators of 36 dystopian movies which open our eyes to the dangers of authoritarian rule.

Cass R. Sunstein, law professor and former administrator of the Federal Office of Information and Regulatory Affairs under President Barack Obama, has gathered together 17 essays on Constitutional Rot, Paradoxes of the Deep State, Cascading Intolerance, How Democracies Perish, and other explorations of what the U.S. future may hold.

Can authoritarian rule happen here? According to Sunstein and company, events such as the 1942 internment of Japanese citizens by executive order during World War II reveals the kind of racial prejudice, rigid thinking, and paranoia which comes across as a red carpet to those espousing fascism or totalitarian ideas and ideals. Sunstein answers his own question — can it happen here? — by noting: "It has happened before. It will happen again. To many Americans, something like it is happening now."

If this prospect and present circumstances worry you, we suggest that you also read On Tyranny by Yale professor Timothy Snyder. It presents 20 lessons emerging from reactions to Hitler's rise to power by the Soviet Union, Czechoslovakia, and Poland. These illustrations yield concrete and historically based ways to resist totalitarianism in the United States. 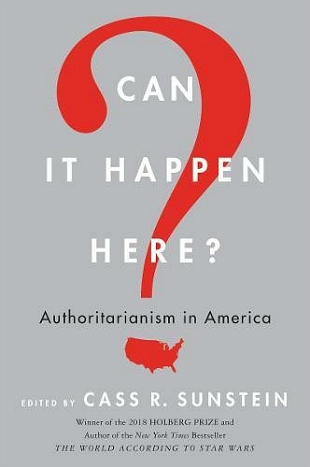