On Tyranny Twenty Lessons from the Twentieth Century

By Timothy Snyder
Concrete advice from history about how to resist totalitarianism in the U.S.

Timothy Snyder is the Levin Professor of History at Yale University. He is the author of Bloodlands: Europe Between Hitler and Stalin and Black Earth: The Holocaust as History and Warning.

With a boldness that challenges conventional thinking, Snyder
points out that democracy failed in Europe during the 1920s, 30s, and 40s and is gasping for air in many other parts of the world as well.
Yet the response of many Americans to the possible coming of tyranny is the familiar response "It can't happen here."

But the world is already seeing signs of totalitarianism in the United States. It is being spawned by inequality, racism, violence, and surveillance. Is there still time to resist fascism on the move? Throughout this hard-hitting paperback, the author reflects upon the present situation and sees grim parallels with Europe during the rise of Hitler and Nazi Germany. Here's a proposition to wrap your head around: "Modern tyranny is terror management."

Snyder emphasizes the time which means the most is the beginning: where we are right now. Long ago, political theorist Hannah Arendt warned us to watch out when totalitarian states erase the difference between private and public life, using every means possible to know everything about us.

There is plenty to think about in Snyder's masterful delineation of Twenty Lessons from the Twentieth Century such as:

Do not obey in advance.
Beware of the one-party state.
Remember professional ethics.
Be wary of paramilitaries.
Be kind to our language.
Contribute to good causes.
Be a patriot.
Be as courageous as you can.

Now is the time to resist the overwhelmingly powerful and oppressive forces afoot in America today. This is the book to read about what can and should be done! 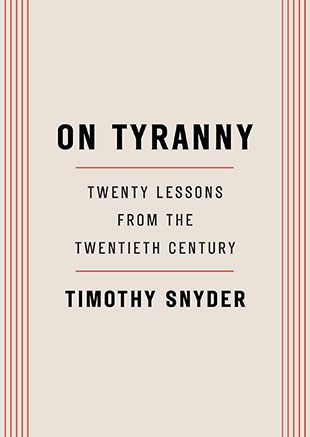