By Chris Hedges
A prophetic critique of the United States designed to get Americans thinking about what is being lost.

Chris Hedges, a Harvard Divinity School graduate, a Pulitzer Prize-winning journalist, former war correspondent, public intellectual and Internet columnist, has written a hard-hitting and prophetic book that offers a multidimensional critique of America's wayward plunge into plutocracy, resulting in the tarnishing, if not outright destruction, of the ideals and fulfilling energies of democracy.

In a telling quotation used as a thought-piece quotation at the beginning of the book, German theologian Dietrich Bonhoeffer laments the sliding of the West into a nothingness that is "rebellious, violent, anti-God, and antihuman. . . . It is a creative nothingness that blows its anti-God breath into all that exists, creates the illusion of waking it to new life, and at the same time sucks out its true essence until it soon disintegrates into an empty husk and is discarded. Life, history, family, people, language, faith — the list could go on forever because nothingness spares nothing — all fall victim to nothingness." Bonhoeffer wrote this in his book Ethics in Nazi Germany in the 1940s, but what he describes is still happening today.

With succinct and masterful strokes, Hedges spells out the wide and expanding reach of global corporations who dictate through endless power plays the activities and policies of U.S. political parties. While middle-class and poor citizens suffer from the devastations of declining wages, unemployment, and the wreckage of industrial America, the rich get richer every year. The result is an emerging battle between an underclass filled with anger and hatred against those who control their lives.

Meanwhile the winners in U.S.A. today are:

Hedges sees American culture in shambles with media violence, a lack of civic virtue, mass shootings, the decline of community life, indifference toward the common good, the opioid crisis, the obsession with gambling, the escapism offered by pornography, magical thinking, and the fear and hatred projected on people of color, immigrants, and homosexuals.

Hopefully, this prophetic work by Chris Hedges will act as a speed bump for those of us who are proceeding too rapidly on our own agendas while missing the ample opportunities to speak truth to power, make the best use of our volunteer time, and work in our neighborhoods to keep the spirit of freedom alive-and-kicking in these perilous times. 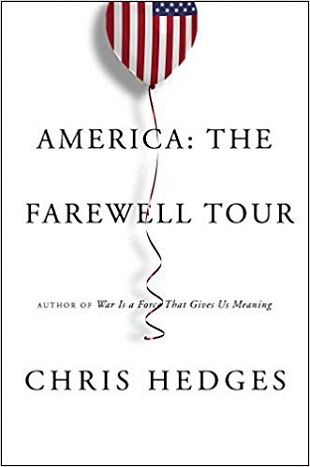