Behold, America The Entangled History of "America First" and "The American Dream"

By Sarah Churchwell
A well-argued examination of some of the darker sides of American racism, nationalism, and political impotence.

Two powerful and almost mythological terms have been cooking in American culture since the formation of the country. Both slogans have to do with nationalism, individualism, and racism. This hard-hitting and well-argued book is by an American-born author who is a professor of American literature and public understanding of the humanities at the University of London. Sarah Churchwell takes us on a meaning-laden journey through these disquieting and at times sinister political, cultural, and racial developments that have sowed discord when and wherever they have surfaced.

"America First" had its genesis in the red-blooded and nativist vision of Walter Raleigh based in Virginia. It gathered momentum on the eve of World War I when the film The Birth of the Nation was released with its toxins of racism and white supremacy. One result was that the Ku Klux Klan gained in popularity and grew more violent carrying out lynchings.

John Winthrop's Puritan settlement saw itself as a "beacon of hope" and later the Statue of Liberty would lift the hopes of those who believed in the "American Dream." Churchwell offers a fine explanation of the mayhem caused by the American Dream with its emphasis on class inequality and the gospel of wealth. She also hits the mark with her responses to Charles Lindbergh and his ideas about the Nazification of America.

Of course, the election of Donald Trump as President of the United States has brought these two disquieting and troubling slogans to new life. Behold, America sheds much light on the dark sides of Americans' racist and nationalistic tendencies. 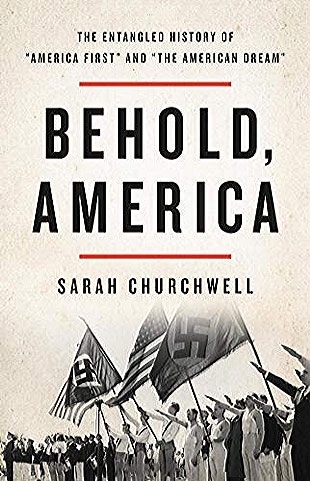