By Matthew Fox, Skylar Wilson, Jennifer Listug
An outline of the vision, practices, and commitments of a spiritual community dedicated to protecting the Earth.

Hats off once again to the inimitable Matthew Fox who refuses at the age of 76 to still his voice or diminish his vision. Over the years, as we note in his profile in the Living Spiritual Teachers Project, he has pioneered fresh adventures for his many readers with books on creation spirituality, work, creativity, men, the wisdom of Meister Eckhart and Hildegard of Bingen, and much more.

In this paperback anthology, Fox has teamed up with wilderness and meditation guide Skylar Wilson and writer and publicist Jennifer Listug to describe how "The Order of the Sacred Earth" can be a viable, prophetic, and activist alternative to the engines of industry propelled by capitalism and consumerism who are assaulting the Earth.

At the hub of OSE is the following vow:

"To defend Mother Earth, to work and live as generously and wisely as we can on behalf of Mother Earth and her creatures so that future
generations might live and thrive and take in her beauty and her health."

Although they are using the title "Order," Fox and his colleagues are not associated with any religious hierarchy. Born out of spirituality, not religion, OSE is a community and a movement of people drawn together out of their love for the Earth. It is also intergenerational, recognizing that while elders have wisdom to convey, they can also use some help from younger people in rewiring their mystical or intuitive brains.

Those committing to the order are expected to engage in practices. Many of these we have been covering at Spirituality & Practice for years, so we are happy to seem them incorporated into such an important cause. They include lectio divina, praying the news, study groups, chanting, yoga, tai chi, silence, art as meditation, exercise as meditation, work, grieving rituals, rites of passage, walking, and group sharing. We especially appreciate this one: "Any practice that deepens your Yes to life or your No to injustice that interferes with life is a prayer practice given our understanding of prayer as a 'radical response to life.' " 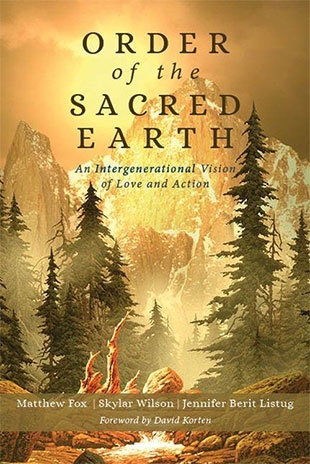