By Bob Hurd
Reverent and insightful assessments of Mystery and liturgy.

We know Bob Hurd to be a sensitive and lyrical liturgical composer and musician. He's been a teacher and liturgist in various pastoral and academic situations, and his widely used liturgical music is featured in numerous hymnals.

It was only recently that we learned that he earned his doctorate in philosophy by writing about the Catholic theologian Karl Rahner. Here we have a mutual connection since we have long respected this German thinker and used this quote by him in many of our writings: "I must confess to you in all honesty, that for me, God is and always has been absolute mystery."

Our multi-splendored world is suffused with beauties, truths, and wonders that extend beyond what we comprehend with our minds or reason. Hurd calls these glories "the life of God moving within us." To illustrate just what this means, he talks about Thornton Wilder's marvelous play Our Town. Here again, we connect with Hurd who celebrates in this homey drama the ways in which our vulnerable lives are animated by the Mystery. As he puts it:

"Jesus tells Simon Peter to leave the shelter of the shore and 'put out into deep water' (Luke 5:4) It is only when Peter puts out into the deep that he encounters the miraculous catch of fish and the mystery of God's presence in Jesus. Spirituality is putting out into the deep. What would it mean for you and me, reader, to stand on the mountain top, listening to the 'tiny whispering sound' that surrounds us, or to 'put out into the deep' instead of just remaining in the shallows of our lives? What would it mean to dwell mindfully at the midpoint between time and eternity, the world and God, and to encounter there the life of God moving within us?"

One of the highpoints in the Christian adventure is sharing in God's life "as Creator, as self-communicating Love (or grace), and as given in radical solidarity with our humanity in the Christ." Still, despite our highest hopes and most resolute intentions, we often lose sight of' the Mystery that sustains us. But there is the Divine bestowal of grace which, Rahner says, 'is the nearness of the abiding mystery." We, in turn, pass this self-emptying love to other people, communities, and the entire Creation.

Hurd sees the liturgy as foundational for Christian spirituality and in the second part of Compassionate Christ, Compassionate People he outlines and explains Learning the Script: Ritual Structures and Texts; The Spirituality of Gathering; Finding Ourselves in the Word; Approaching the Eucharistic Prayer; The Eucharistic Prayer; and Communion/ Sending. There is much to savor here by those who lead liturgies and those who participate in them. Hurd includes references to scripture and notes the value of incorporating classic spiritual practices like Lectio Divina into communal experiences. 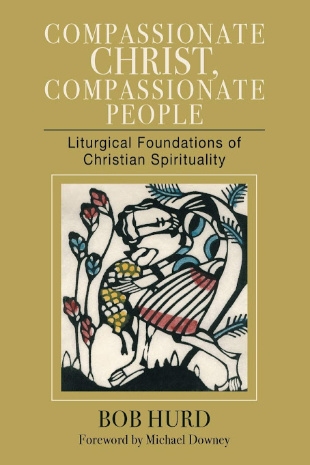