By Jon M. Sweeney
The latest adventures in prayer, penance, and liturgy of the Pope's adopted cat.

When Margaret, the Pope's adopted cat who has likewise adopted him, reaches Thursday of Holy Week, she can tell that the atmosphere at the Vatican is changing. She overhears the Pope talking with his secretary about Tenebrae, learns that it means shadows, and wonders if it's scary. She isn't sure she's going to like everything about this week, even though the Pope picks her up and presses her check to his own.

After breakfast, the Pope says he wants to show her his chapel, so off they go, Margaret with jam still on her paws and milk froth on her whiskers. It turns out this isn't merely a private chapel, but the Sistine Chapel! While Margaret strolls around looking at the amazing pictures, the Pope kneels to pray. She joins him, and when they stand up again, he tells her all about Michelangelo painting the ceiling.

And so we continue to follow this affectionate duo: to prison, where the Pope washes prisoners' feet and calls each mio fratello, my brother; to the Roman Colosseum to commemorate the Way of the Cross; and back to a Saturday breakfast of only fruit and cereal as the Pope explains fasting, because this is not the rich fare Margaret normally enjoys.

She worries a lot: Why is the Pope going to prison of all places? Will they be in danger in the Colosseum where Christians used to be killed? Our favorite among Roy DeLeon's detailed drawings is one of Margaret looking downright horrified at the discussion of prison. But at each stage of the way, the Pope reassures her, not only with his words but also with his actions.

Meanwhile, the reader is learning along with Margaret about everything from places in Rome to Holy Week phrases to Italian food, arguably her favorite part. So on Easter, when she wakes the Pope to the celebration of Jesus coming back to life, it's only fitting that he tells her they will celebrate that night with Pizza a Caballo — pizza with a delicious flatbread on top!

Written for children from Kindergarten through 5th grade, this book with its short chapters serves as a friendly introduction to some of the deeper meanings of Holy Week and also as an adventuresome romp through Rome and its cuisine. Margaret's attachment to the Pope and concern for him are, as always, endearing. It never ceases to lift our hearts to be in Pope Francis's presence, even vicariously through Margaret's eyes. 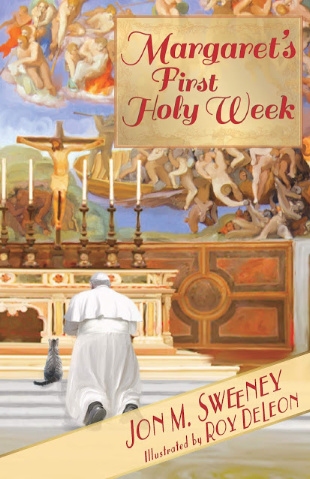