By Demi
The story of the multi-talented mystic, musician, and saint who was one of the most influential people of her time.

Award-winning author and illustrator Demi, whose titles have sold more than half a million copies, brings to life the story of Hildegard of Bingen for children in early elementary school. She begins with "Once upon a time in 1098 AD," plunging us into a true and vivid tale through her flowing green hills inhabited by gamboling lambs, grazing cows, and other field and woodland creatures, a backdrop to the decorative, colorful details of a house bursting with children.

One, in her mother's arms, already radiates light as a priest blesses her. This is Hildegard, and we learn that when she closes her eyes, she perceives lights full of pictures of heaven. We see her reaching toward and basking in an extraordinary mandala made up of angelic wings and faces, the whole shining like a sun.

We follow Hildegard's experiences with these dazzling lights that inform her of what is to come, even down to specifics like the color of a calf still in its mother's womb. Her parents bring her to the Benedictine Cloister of Mount St. Disibod, where she studies Biblical history, spinning, prayer, and most of all, music. She observes, "There is the music of Heaven in all things and we have just forgotten how to hear it until we sing it!"

Skillful and well loved, Hildegard becomes Abbess of the cloister, but she is tormented by unbearable headaches that accompany her visions. Finally, she hears a voice say that she must let her inside lights shine out so that others can see what she sees. She obeys, and a nun and a monk take dictation as she describes her visions. At 53, she completes her book Know the Ways of God, which becomes so famous that people from all over show up to receive her counsel. To have enough room for all these pilgrims, she moves with her nuns to Rupertsberg near the town of Bingen.

As Demi continues to describe Hildegard's accomplishments, we see her milking a ewe, baking bread, gathering leaves, tending the sick, and even keeping bees. We discover that she wrote ten books, one of them a cookbook! And even into her sixties and seventies she toured Germany, teaching, healing, prophesying, and organizing monasteries.

For curious minds that want to know even more, Demi provides an appendix at the end that tells more about Hildegard's books, her scientific work, the language she invented, and even her recommendation of breakfast foods. We come away from the book both inspired and informed. 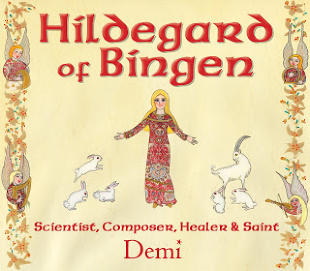