The Galapagos Islands A Spiritual Journey

By Brian D. McLaren
A spiritual writer's transformation during a visit to the famous islands.

Brian D. McLaren is a speaker, author, activist and networker exploring the intersection of Christian faith and contemporary life. He has written over a dozen books and for 24 years served as the founding pastor of the Cedar Ridge Community Church in the Washington-Baltimore area. He now lives on Marcos Island in Florida where he raises tortoises and writes.

"Everyone needs beauty as well as bread, places to play in and pray in, where Nature may heal and cheer and give strength to body and soul alike."
— John Muir

Needing to celebrate his own survival and to escape from what he calls the toxic politics of his native land and the stale indoor air of religious struggle and controversy, McLaren heads off to the Galapagos Islands where he hopes to be rebaptized into the wild. Having long been privy to the "indoor theology" mostly created by privileged white males of European descent, he decides it is time to explore the theology that arises in conversation with the wild world. This is the theology, grounded in places, embraced by indigenous peoples and other nature lovers (many of whom are quoted throughout the book.)

"God's boundless compassion, especially in its many and varied ecological expressions, embraces all of us in the warm heart of nature's church, calling us to worship therein, and to protect this worldwide green temple as our loving home and common destiny."
— Mark Wallace

McLaren calls his 16 fellow adventurers on this "once in a lifetime experience" worshippers on the land and in the sea. They are awed as they see black sea turtles, sea lions, birds, and more than 30 different kinds of reef fish. "We let the reverence and awe they deserved rise within us and wash over us like waves from mysterious, unseeable depths."

McLaren ponders how this distinctive place has been battered and bruised by the conquistadores and other greedy souls. He salutes "the holy resiliency of others doing their best to restore what has been desecrated." Among his heroes is Charles Darwin; he admires his curiosity, his scientific insights, and his belief in evolution and change.

"It's a funny thing coming home.. Nothing changes. Everything looks the same, feels the same, even smells the same. You realize what's changed is you."
— F. Scott Fitzgerald

For eight days in the Galapagos, McClaren feels the keen pleasure of being immersed in everything. He recalls the pressure to avoid being punished or punishable and to avoid those who are that was part of the conservative white American Christianity he was raised in as a boy. He ponders how religion itself is evolving, leading him through a fascinating dialogue with his "inner guineafowl puffer" fish!

"The great novelist Marilynne Robinson was once asked by an interviewer, 'What single thing would make the world in general a better place?'

Transformed and renewed, McClaren ends on a high note of lyricism and praise:

"You are in the midst of an amazing saga of evolution.
You are part of the unfolding, the awakening, the infinite adventure.
Beauty abounds, answering your questions.
Your journey has begun, and you have embarked.
You have eyes to see and a part to play." 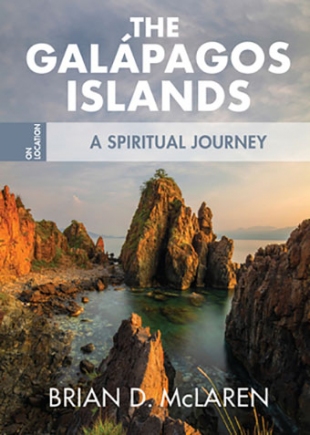 Ask the Beasts: Darwin and the God of Love by Elizabeth A. Johnson