Leave It to Abigail! The Revolutionary Life of Abigail Adams

By Barb Rosenstock
The biography of an early First Lady with political clout of her own.

Barb Rosenstock, the author of the Caldecott Honor Book The Noisy Paint Box and other titles receiving starred reviews, uses the refrain "Leave it to Abigail" to show how, from the time she was small, Abigail Adams defied expectations. Born delicate and not expected to live, Abigail had an insatiable curiosity, eavesdropping on conversations with guests and devouring the books in her father's library to educate herself at a time when most girls knew "just enough words to read the Bible and just enough math to shop." She was expected to marry a prosperous minister, but — "leave it to Abigail" — she insisted on marrying John Adams, the struggling country lawyer she loved.

And so this biography progresses with Abigail's powerful combination of competence and boldness that allow her to run a household, shape John's words when he writes about colonists' rights, teach her children, feed militias, house refugees fleeing Boston, and eventually sail to Europe and live with John in France and England while he served as ambassador for the new United States. She even suggested to John that women be included in the rights given in the Declaration of Independence. John laughed — but Abigail "was not amused" that he considered her suggestion a joke.

When John became the second president of the newly formed country, "Everyone knew that the president's wife should stay out of politics." But Abigail nonetheless remained John's staunch, well-informed, savvy advisor.

Illustrator Elizabeth Baddeley enhances the story with an array of mediums including pen, ink, watercolor, colored pencil — and even, appropriately, needlepoint! She depicts Abigail in a variety of moods: determined when she's reviewing John's articles on colonial rights, concentrating on letter writing amid the hubbub of a busy kitchen, sharing a hearty laugh with John Hancock, gazing with longing out a window when she misses John in Europe, winking at the reader when she sports the latest European fashions to chat with kings and queens.

Rosenstock brilliantly brings the book up to date by saying that "everyone knew there would never be another woman like [Abigail]" and then, with Baddeley's able help, creating a two-page cross-stitch spread featuring twelve women from different eras whose achievements have stood the test of time: Sojourner Truth, Susan B. Anthony, Ida B. Wells-Barnett, Eleanor Roosevelt, Alice Paul, Bella Abzug, Patsy Takemoto Mink, Coretta Scott King, Dolores Huerta, Gloria Steinem, Hillary Clinton, Winona LaDuke. She tells us in her closing Author's Note that she sorted through hundreds of biographies to select these twelve and that her original list ran to four single-spaced pages, and she shares some of those names, too. Abigail's legacy of independence, as this book for four to eight year olds amply reveals, lives on, and this book will serve to inspire even more of it. 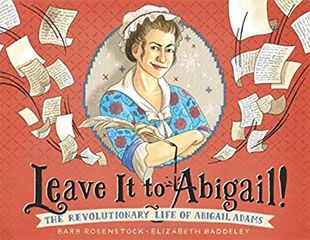