By Lawrence Shainberg
Sparks of wisdom from the author's literary friends and his Zen master.

Lawrence Shainberg is the recipient of a Pushcart Prize for a monograph on Samuel Beckett. Based in New York City, he has been practicing with Japanese Zen master Kyado Nakagawa for more than 15 years. In this creative and compelling memoir, the very smart author ponders the complexities and rewards of Zen, writing, old age, and taking to heart the wisdom of three imaginative men.

Shainberg sees Norman Mailer as his muse and is eager to obtain from him encouragement and advice on taking the leap from fiction to journalism. He alludes to Mailer's book Armies of the Night as a "perfect combination of real-world description and novelistic style," which Shainberg hopes to emulate. Mailer wrote 37 books, made three movies, won three Pulitzer Prizes, and ran for Mayor of New York, finishing last.

Shainberg considers it fortunate that he was able to establish a correspondence with Samuel Beckett who at the age of 74 could rest on his laurels of publishing 12 novels, 16 plays, 14 radio plays, a film script, and a book of criticism on Proust. Shainberg respects his reverence for mystery especially in his favorite line in all his writings: "If there's one question I dread, to which I've never been able to invent a satisfactory reply, it's 'What are you doing?' "

The author's goal is to act on the spiritual and philosophical insights he receives from Kyudo Nakagawa, Norman Mailer, and Samuel Beckett. Each becomes a representative of a key Buddhist concept: Nakagawa for living in the present, Mailer as form, and Beckett as emptiness. 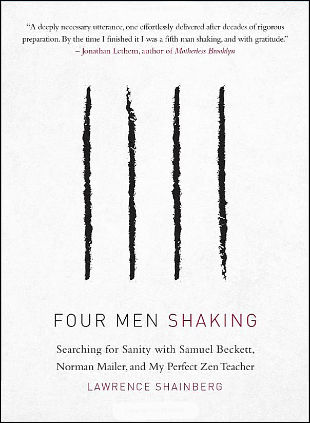