By Joseph J. Fahey (editor), Walter Rauschenbusch
Key passages from the writings of the Baptist minister, theologian, and voice of Social Gospel movement.

Walter Rauschenbusch (1861-1918) was the most exemplary example of the Social Gospel movement of the late nineteenth and early twentieth centuries in the United States. In its essence, it was an effort by Christians to relieve the misery of workers and find ways to get in touch with the revolutionary edge of Jesus' life — to move beyond the greed, selfishness, and amorality of the rich and the powerful. It was a quest for justice and the establishment of the Kingdom of God on Earth now through love, nonviolence, universality, and a keen sense of the perils of wealth.

Joseph Fahey, who selected the passages in this volume in Orbis Books' Modern Spiritual Masters Series, also wrote the introduction in which he presents an impressive list of those who were influenced by Rauchenbusch. This quotation by Dr. Martin Luther King, Jr., sums up this Baptist minister's vision:

"Rauschenbusch had done a great service for the Christian Church by insisting the gospel deals with the whole man, not only his soul but his body; not only his spiritual well-being but his material well-being. It has been my conviction that ever since reading Rauschenbusch that any religion which professes to be concerned about the soul of men and is not concerned about the social and economic conditions that scar that soul, is a spiritually moribund religion waiting for the day to be buried."

Strong words. This thought-provoking examination of Rauschenbusch's life and work is bound to stir your conscience and lead you to work to establish justice in those places where it is deeply endangered today. 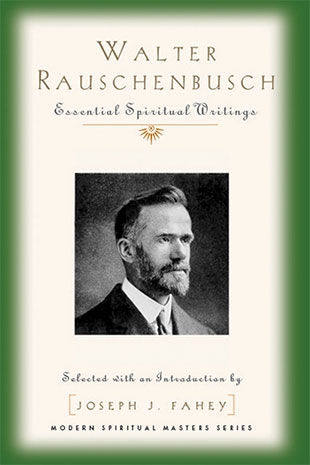