By Erica Lee
A thorough and shocking history of Americans' fear of strangers.

We were raised with an idealistic and inspiring image of America as a "nation of immigrants" and a country that welcomed people from around the world who were "yearning to be free." But there is also a darker and uglier side of the United States as a draconian place where immigrants of all stripes have been hated, dehumanized, and condemned as threats to the nation.

Erica Lee is a Regents Professor, the Rudolph J. Vecoli Chair in Immigration History, and director of the Immigration History Research Center at the University of Minnesota. She points out early in this sturdy and often shocking history and reassessment of immigration that the term "xenophobia" is derived from the Greek where it is defined as "fear of the stranger." Now it has been greatly amplified into a prejudice, an ideology, and a worldview.

Lee has chosen a chronological approach to xenophobia and so begins with Benjamin Franklin's obnoxious view of immigrants arriving from Germany in pre-revolutionary Pennsylvania; he considered newcomers to be inferior to the white, Anglo Saxon, and Protestant immigrants from Great Britain. During the mid-nineteenth century, the "Know Nothing" party directed their hatred and condemnation against Irish Catholics whom they characterized as unskilled, poor, and beholden to the Pope who would eventually take over the United States.

The early waves of Chinese immigrants were targeted in the "Chinese Exclusion Act," adopted in 1882 as the first law in American history to place broad restrictions on new arrivals. The Chinese dreaming of coming to the land of the free and the brave could not do so during a 10-year moratorium. Many Asians were sent home when fears grew that they were turning the West Coast into an colony of their own. As if that weren't enough, the Japanese were imprisoned in internment camps during World War II where their rights were violated and their dignity demeaned.

Racism and white supremacy are deeply entwined with the shabby treatment of Mexicans who have come to America to find jobs and have been scorned for taking work away from U.S. citizens. Following 9/11 and the War on Terrorism, various Republican administrations have done all they can through laws and restrictions to protect the homeland from what they regard as a Muslim scourge.

America for Americans by Erica Lee offers a comprehensive and enlightening examination of the cultural history of xenophobia in this country that traditionally has taken pride in its embrace of diversity and freedom. It reveals the anti-immigrant history that has rarely been explained in such detail. As such, it is a wake-up call to work to change U.S. immigration policies. 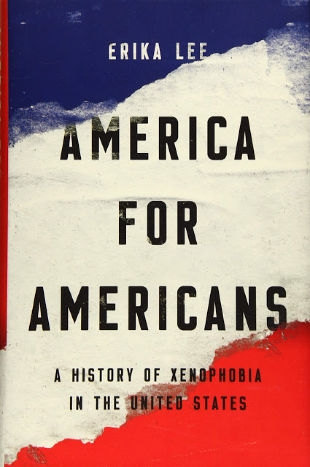