Politics Is for Power How to Move Beyond Political Hobbyism, Take Action, and Make Real Change

By Eitan Hersh
A cheer for politically engaged people who are making a real difference in their communities.

Data analyst and political scientist Eitan Hersh is upset about the superficial and paltry political engagement of many Americans today.

In 2018, he asked a representative sample of citizens to how much time they spend on any kind of political-related activity in a typical day. A third of them said they spent two hours a day. Of these people, four out of five said that not one minute of that time was spent on any kind of real political work.

Hersh has a name for these folk who spend their time watching TV news, listening to podcasts and radio shows, consuming social media, and cheering, booing, or complaining to friends and family about the political system. They may make an occasional donation or sign a petition, but they are just political "hobbyists," and he believes they are hindering the flourishing of democracy.

Hesh is convinced that there is a viable alternative to political hobbyism: "I can show you the redemption of politics as a service to others, a form of politics where participants get power to improve their communities, present and future." Toward that goal, the author introduces us to citizens across the country who see politics as a step to real power and social change. They are mobilizing, lobbying, and making policy presentations. True political activists enjoy voting in local elections more than watching presidential debates. They have a long history of interest in politics and they want to make a difference. Hersh commends these voters who are seriously trying to improve their communities. 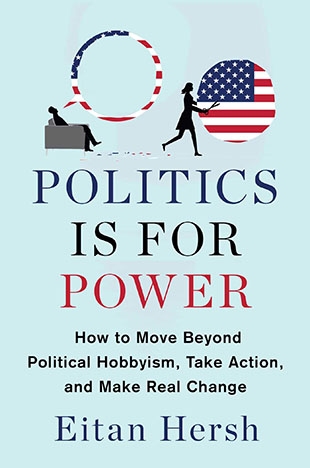