By Madan Kataria
Techniques to encourage the profound health benefits of unconditional laughter.

Dr. Madan Kataria, popularly known as the "guru of giggling," is the founder of the worldwide laughter yoga movement which he started in Mumbai, India, in 1995. Retired from medical practice, he writes, teaches, coaches, and trains laughter leaders to foster the spread of laughter clubs. He is the creator of World Laughter Day, which is celebrated on the first Sunday of every May. There are now 16,000 laughter clubs and 500,000 laughter yogis in 108 countries, with five to ten new laughter clubs starting each week.

Dr. Kataria begins this book with the history of the movement. It evolved from his realization that laughter need not only be the result of entertainment or amusement. People could laugh for no reason; in fact, such unconditional laughter can have profound health effects. It is a powerful antidote to depression which, according to the World Health Association, afflicts 300 million people worldwide. It reduces stress and combats anger and other negative emotions. It can even help in the workplace:

"It is believed that seriousness is the key to being more effective. However, this is not always true. People who are serious are usually less productive, and those who take themselves lightly are likely to be more efficient."

Laughter yoga combines unconditional laughter with yogic breathing — pranayama. Sessions are built on the understandings that to reap its benefits, laughter should be sustained (10 - 15 minutes), deep, and not left to chance. Think of how children laugh spontaneously without having to have a reason.

Kataria then goes beyond philosophy to explore the science of laughter yoga. A chapter on the "Fifteen Steps of Laughter Yoga in a Group" covers many practical considerations. We enjoyed the nicknames given to types of laughter: Namaste Laughter, Milkshake Laughter, Cell Phone Laughter, Lion Laughter, Gradient Laughter, and One-Yard Laughter. Couples might try Peek-a-Boo Laughter, Hugging Laughter, and Standing on One Leg Laughter. Tips for setting up your own laughter club are also included. You can increase your capacity for laughter by singing, smiling, dancing, and playing.

Laughing opens the doors to new possibilities, no matter what our age. Gordon Livingston, who writes for elders, has observed:

"Humor is a form of sharing, an interpersonal exercise. To share laughter is away of affirming we are all in this lifeboat together. The sea surrounds us; rescue is uncertain; control is illusory. Still — we sail on together."

A while back, we decided that laughing is so important that it deserves its own topic page at Spirituality & Practice. We invite you to visit it to find links to our content about laugher, including quotes, books, DVDs, excerpts, and practices to give you many ways to appreciate laughing. Plus, we've been collecting jokes and cartoons on Pinterest. 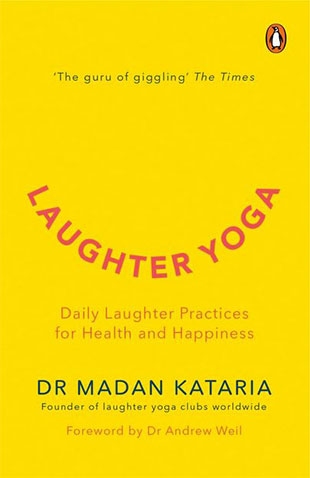