By Sarah Baxter
Beautifully illustrated guide to the stories and distinctive features of 25 places that will awaken your wonder.

In ancient times, Rome was home to a plethora of pagan cults. When those groups diminished, numerous pagan temples and other sites were converted into churches. The Pantheon, for example, was once a temple devoted to Roman gods, but later became a Roman Catholic church dedicated to St. Mary and the Martyrs.

Travel writer Sarah Baxter is the guide to 25 mystical sites from around the globe. This volume is part of the Inspired Traveller's Guide series on edifying and wonder-inducing journeys. Titles already released include Spiritual Places, Literary Places, and Hidden Places.

Mystical Places covers sites imbued with supernatural forces, fascinating stories, unusual ceremonies, and mesmerizing geographical vistas. Baxter gives the history and geography of each site and notes its most significant feature. This out-of-the-box book's most unusual feature is the colorful and creative illustrations by Amy Grimes for each place; they made us want to visit Cadair Idris in Wales, Lake Bled in Slovenia, the Stone Circles of Senegambia in Senegal and The Gambia, Spiti Valley in India, and the Pennacles in Australia.

All these places like the ancient temples of Roman pagans have gone through many physical changes and soulful transformations. They model for us the transitory nature of the places with great and tiny. 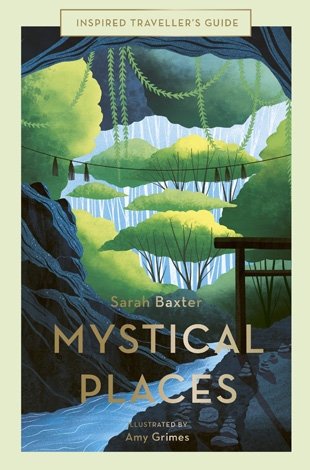