By Annelien de Dijn
Substantive overview of the history of freedom.

"Freedom is a lofty ideal, celebrated by poets, artists, and philosophers alike. But it is also a formidable ideological weapon. Those who have followed public debate in the United States and other countries over the past several decades will have no trouble recalling countless examples of liberty being involved to achieve political ends of one sort or another. Pundits identify institutions and policies they disagree with as threats to liberty. Politicians accuse their rivals of being insufficiently freedom-loving. Foreign nations and actors are labeled a danger to national liberty in order to increase support for military action against them."

As this paragraph by Annelien de Dijn makes clear, freedom is a potent concept with far-reaching applications. In this substantive work of history, de Dijn, a Professor of Modern Political History at Utrecht University and author of French Political Thought from Montesquieu to Tocqueville notes that freedom has had a bumpy journey down through the ages from its genesis during antiquity, its revival during the Renaissance, and its widespread and dramatic transformation during the 19th and 20th centuries. De Dijn writes forcefully when she states:

"The history of freedom is not one of polite debate between gray-haired philosophers tucked away in ivory towers. It is instead a story of fierce political battles in which some people, quite literally, lost their heads."

Some of the thinkers, historians, and philosophers covered include Francesco Petrarch, Niccolo Machiavelli, Benjamin Constant, and Johann August Eberhard. Among the heavy-duty ideals and ideas explored are democratic self-rule, freedom's critics during different eras, the temporary demise of the cult of freedom, freedom and natural rights, the American revolution, civil vs. political liberty, and the triumph of modern liberty. 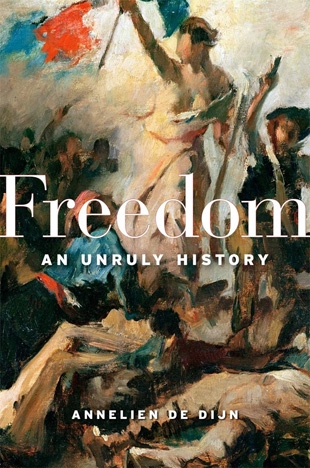