The Snail with the Right Heart A true story

By Maria Popova
A story about uniqueness, gender, love, and the grandeur of the universe.

Imagine that you are a retired scientist who — right after hearing a snail researcher interviewed on the radio — serendipitously comes upon a most unusual garden snail. This snail, darker and smaller than most, has another strange difference: its shell spirals the opposite direction from ordinary snails, left instead of right. What would you do?

This marvelous book by Maria Popova of Brain Pickings fame tells the story of this wise scientist's decision to send the little snail in a cozy box to the researcher, in case "its strangeness held some beautiful secret waiting to be unlocked." Like all land snails, this one — Jeremy — is a hermaphrodite, "neither a he nor a she ... a they." Snails can make babies alone, but they prefer to have mates: "because diversity is always lovelier than sameness, and because it makes communities stronger and better to adapt to change." But in Jeremy's distinctive case, the search for the right mate is complicated.

Because Popova's mind grasps a cosmic scope, she begins this whole story not with the snail, but way back "long ago, before half the stars that speckle the sky were born." By taking into account the scope of time up until the snail's discovery, she can gently unlock for young readers (ages 7 - 12 years) the marvels of mutation. Then when the snail researcher reaches out — again through radio — to the whole world to appeal for help finding Jeremy a mate, Popova uses the opportunity to explore the wonder of genes, "like tiny seeds your parents plant in the garden that becomes your body."

Never for a moment does this scientific story become dry. It is laced throughout with poetic imagery and humor. For instance, remarking on Jeremy's rare recessive gene that places the heart on the right side, rather than the usual left — a condition which may be as rare as one in a million — Popova observes, "Life can be lonely when your mate is one in a million."

At every step of the way, illustrator Ping Zhu is the perfect partner for these wide-ranging reflections on uniqueness, gender, love, and the grandeur of the universe. When the retired scientist first meets Jeremy, we see only his boots as they approach Jeremy, whose significance leaps out of the picture because of the way the boots' toes and the flow of grasses all point to the little snail. When we see people out searching for a mate for Jeremy, their faces reveal how intensely engrossed they are in searching together, so much so that we can practically hear them speak.

The "right heart" of the book's title is one of Popova's brilliant turns of phrase. Yes, Jeremy's heart is on the right side, but the story tenderly turns to real matters of heart that humans experience, too. What happens when we can't have children? And what happens when we finally find the right mate, even in twists of circumstance? Touching upon these themes through a snail's life, we discover that "left or right, the heart wants what the heart wants." 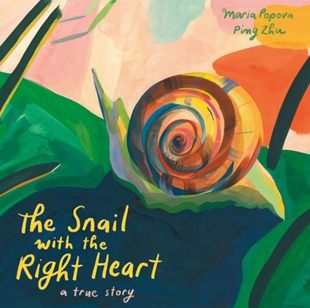