The Seeker and the Monk Everyday Conversations with Thomas Merton

By Sophfronia Scott
A wise encounter between a twenty-first century Black spiritual writer and the famous white Catholic monk.

Author Sophfronia Scott describes the feeling of difference she has with Thomas Merton right from the start. He was a white monk; she’s a Black woman. He was Catholic; she’s “Episcopalian, with Baptist notes from my childhood.” Most telling, she imagines personality differences, such as this one:

“[I]f I met him today at a cocktail party, I’d probably find Merton boisterous and slightly boorish. Later I’d likely describe him to friends as having that entitled, mansplaining kind of tone that makes you keep your distance.”

She didn’t encounter Merton critically, at first. She “met” him through his books, 43 years after his death. And Scott’s experience will be familiar to anyone who has been profoundly moved by an author’s books. Hearing a passage from Merton’s Conjectures of a Guilty Bystander, she remembers feeling this way: “I felt something open up in my whole being. It felt immense and small at the same time because it felt like one word: Yes, Yes, I thought. That’s exactly it.”

Thomas Merton is featured in our Remembering Spiritual Masters Project. We honor him as a pathfinder for the Christian contemplative spirituality movement, a pioneer of interspirituality and interfaith dialogue, and a social activist and cultural critic.

The Seeker and the Monk is Sophfronia Scott’s encounter with this fascinating and important mid-twentieth century Trappist monk as a writer and spiritual teacher, and the book is full of both of their wisdom. Most enjoyable is how she engages with Merton as a man and human being, all the while “conversing” with him on topics of relevance to every person today. She talks about his complaints, his sarcasm, and playfulness, and how it all makes her laugh. She clearly likes him, and that long-distance friendship forms the foundation of the book.

Joy and friendship between the two writers — even across significant generational, racial, and religious differences — provides a groundwork of good feelings which are infectious for the reader.

Most of all, Scott writes, “it is the unvarnished Merton of the seven private journals — my Thomas — I converse with.” These are journals that Merton did not write for publication, and in fact, whose contents were sealed for 25 years after his death.

The bulk of the book is then given over to topics such as “When What We Own Owns Us,” “How to Put Ambition in Its Place,” “How to Find God’s Presence in Nature,” “How to Make Spiritual Friends,” “How to Serve the World,” “How to Pray,” and “How to Love,” with the journals and other sources as Scott’s working material. Relevant biographical details from Merton’s life and overviews of his writings are given fresh relevance from Scott’s perspective in the third decade of the twenty-first century.

She writes in conversation with Merton, in ways that are therapeutic for us. For example:

“The travesties of the world used to make me want to cloister myself, shaking my head as I went. Strangely enough, the coronavirus pandemic caused me — and millions of others — to check out from society. We were under stay-at-home orders for weeks. ‘We’re all monks now,' Dr. Gregory Hillis notes in an article for America magazine. After what I saw on the news — Minneapolis and other cities burning for days and a president who could only say the situation was ‘not good’ — I was inclined to stay cloistered. … Yet a hermitage is not where I’m supposed to be. Somehow I sense this. I’m supposed to be saying something, doing something. And yet I feel anything I could offer would get swallowed up in the noise. ... I feel as though Thomas stands next to me in a similar stance. He helps me think about the possibilities. I think he’d say I have to get out there. I have to find a way to serve.” 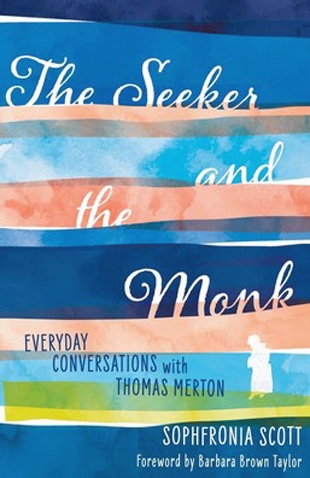