Living Is Dying How to Prepare for Death, Dying and Beyond

By Dzongsar Jamyang Khyentse
Tibetan wisdom for dying well and living in the awareness that we will one day die.

I remember as a teenager being startled by the profundity of a line in a song by The Smiths — “In the midst of life we are in death, etcetera” — only to learn a year or two later that they lifted it straight from the Anglican Book of Common Prayer. A similar notion with much greater depth and layers of meaning, ritual, and practice has been present in Tibetan Buddhism for more than a thousand years.

This book introduces Tibetan practices surrounding death for non-specialists. The author is a lama, a spiritual leader in Tibetan Buddhism. There are three aspects to the book: how to face death calmly and confidently in the Tibetan way; how to counsel the dying with Tibetan wisdom; and how, according to Tibetan teaching, to care for the body of someone who has died.

The third aspect may feel less relevant to the reader who is not an adherent of Tibetan Buddhism. For example, the placing of a tagdrol (a specially empowered mandala) on a corpse is discussed in detail, as are proscribed ways of handling the body, the idea of repaying karmic debts, and certain prayers, practices, and ways of meditation for and on behalf of the dead and dying.

Unusual in a book such as this are the full-color illustrations from classic Tibetan sources. This makes a book about death strangely beautiful.

This essential teaching undergirds everything else in Living Is Dying: “According to buddhadharma, death teaches us one extremely positive truth: that the nature of each and every sentient being’s mind is the Buddha…. At the moment of death, whether you are a seasoned Buddhist practitioner, the CEO of Google, a Wall Street trader or a materialist of any kind, the natural process of dying will force your mind to separate from everything you have ever known…. When you die, your entire body, including its most subtle elements (earth, water, fire, air, space) and senses, must be left behind.”

Chapter One, “Will I Die?,” introduces death — a subject that is universal to all people — with a view to Tibetan spirituality. Some of the teaching is frank and straight to the point:

“Everything we human beings do, think and feel while we are alive is driven by ignorance, emotion and karma. And ignorance, emotion and karma conspire to ensure that we have no choice but to face both birth and death entirely alone. Once we have been born, nothing and no one can prevent us from dying. The inevitability of death is initiated at birth, and we are powerless to resist it.”

The Tibetan view of life in many ways begins and ends with death. The author writes, “Birth and death are inseparable. We should therefore mourn birth just as much as we mourn death. Especially these days.” This is followed by discussions of preparing for death — in general and in specifically Tibetan Buddhist ways — and of what you will see after you die. 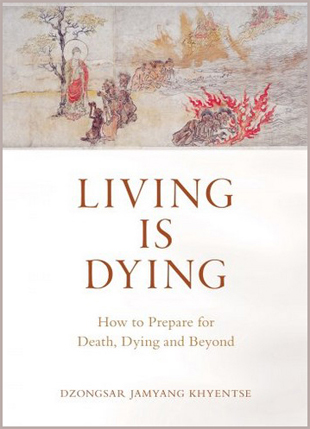