One Drum Stories and Ceremonies for a Planet

By Richard Wagamese
Indigenous ceremonies and wisdom from an Ojibway teacher, accessible for any spiritual seeker.

This author and Native teacher deserves to be better known. His wisdom is deep and grounded. An Ojibway from the Wabaseemoong First Nation in northwestern Ontario, a few of his books were bestsellers in Canada.

This is the manuscript of stories and ceremonies that Richard Wagamese left behind at the time of his death in 2017. “We are all one energy, one soul, one song and one drum,” he writes, reflecting the wisdom of Ojibway Grandfather Teachings and drawing readers of any faith or background into the circle.

A “Note from the Publisher” tells us that Wagamese intended to write ceremonies for each of the Seven Grandfather Teachings but was only able to complete four before his death. Those four are here and are for teaching humility and courage. They are “The Sacred Breath,” “The Tobacco Offering,” “The Vision Quest,” and “Acting Outwardly.”

Wagamese presents each ceremony in a way that nearly anyone can do it. For example, he writes this in the introductory pages of “The Vision Quest”:

“Traditionally, a Vision Quest takes four days and requires a traditional teacher to act as a guide, to interpret protocols and act as a prayerful intermediary. But this one, this simplified and doable ceremony, takes a single day. It can be done by anyone from any culture who seeks to rediscover and remember their place in the scheme of things, who seeks to forgo their sense of lostness and harmony with the planet. It is for anyone who craves spirituality and a spiritual way. It is for the human family.”

There are also beautiful and bracing stories in this book, such as the one about Reuben the inquisitive raven. This is under the heading of “Minwaadendamowin,” which is Ojibway for “Respect.” Early in this story, the author offers this account of conversation:

“His parents and family were amused. They shared the insatiable curiosity of all ravens but they had never taken it to the heights that Reuben had.

“ ’Reminds me of my daddy,’ Grampa Raven would say. ‘He’d fly far and wide just to see a wonder.’

“ ’Aren’t you afraid it could get him in trouble someday?’ Reuben’s mother asked.

“ ’Oh, no,’ Grampa Raven said. ‘Wonder is the glue that holds everything together. It keeps you searching, eager for more. Out of wonder comes awe and out of awe comes respect and that’s the most valuable gift of all.’ ”

Throughout all the ceremonies and stories in One Drum, Richard Wagamese looks closely in each creature for spirit and in each person to find the shaman inside. And he encourages everyone to see and hear how we, too, are shamans and teachers. Ask yourself: What is your spirit teaching you and what will your spirit teach others? 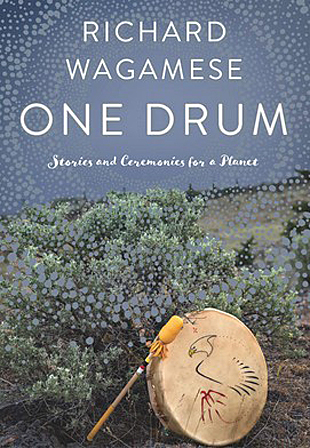