Against the Hounds of Hell A Life of Howard Thurman

By Peter Eisenstadt
A treasury of stories and information about one of the great Black spiritual leaders and theologians of the 20th century.

This is a big book, 500-plus pages, and it couldn’t have been done as well as it is without being big. Howard Thurman (1899 - 1981) was a giant of a person. This will likely be the definitive biography for a half-century or more.

Author Peter Eisenstadt is associate editor of The Papers of Howard Washington Thurman at Boston University School of Theology and co-editor of Walking with God: The Sermon Series of Howard Thurman, also soon to be reviewed here.

A graduate of Morehouse College and Rochester Theological Seminary, Thurman became a Baptist pastor in Virginia and Ohio in the 1920s. Then, after studying Rufus Jones, the great Quaker author and teacher, his religious viewpoints deepened and broadened. During the Second World War, Thurman cofounded a groundbreaking religious assembly in San Francisco called the Church for the Fellowship of All Peoples, a racially and religiously integrated congregation unlike any other and way ahead of its time.

In 1953, he moved to Boston to join Boston University as dean of Marsh Chapel, becoming the first Black dean of a white-majority major American university. He had earlier spent 12 years as dean of Rankin Chapel at Howard University.

In Boston, he became a mentor to the Rev. Martin Luther King, Jr., whom he had also known as a boy in Atlanta. Thurman and the senior Martin Luther King were friends. It was Thurman who taught Dr. King the lessons of Mahatma Gandhi, which Thurman had learned in India firsthand. And Dr. King carried a copy of Thurman’s most important book, Jesus and the Disinherited, in Montgomery during the bus boycott.

It was during his time at Howard University that Thurman received from Gandhi the torch of satyagraha (“nonviolent resistance to oppression”), carrying it back to the United States where it became the light of the Civil Rights Era. The meeting between Thurman and Gandhi was in February 1936, some 21 years before when most people mark the beginning of the Civil Rights fight in the United States (with the founding of the Southern Christian Leadership Conference).

But all of this is sort of the Cliffs Notes version of a fascinating life and an outstanding biography.

Eisenstadt spent 25 years researching his subject, and his access to the source materials is second to none. To give just one representative example, he tells a story of Thurman traveling by ship to India for the months-long tour of lectures and conversations. Thurman disembarks the ship in colonial-held French Africa, where an African guard searches him thoroughly, even as he hadn’t bothered to search any of the white passengers before him. Quoting from a file of Thurman’s papers never published, Eisenstadt shares Thurman’s memory of what he said to the guard at the moment: “I do not know whether you speak my language but I think your eyes speak my language. Let us not make the man who is making you do this make me your enemy and you my enemy. For, if we do, then this enmity between us will erect a wall. And when it is high enough, he will sit on that wall with one foot on your head and another foot on mine.” 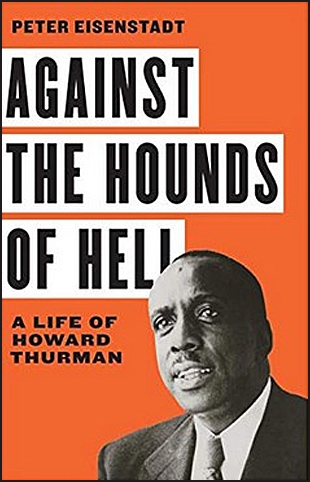 Moral Struggle and the Prophets

The Way of the Mystics