To My Beloveds Letters on Faith, Race, Loss, and Radical Hope

By Jennifer Bailey
An eloquent Black theologian tells her story of hope and resilience.

This book confused me at first because it is packaged like a gift book, but really it is a profound memoir of activism and faith.

Rev. Jennifer (Jen) Bailey of the African Methodist Episcopal Church serves on the pastoral staff of Greater Bethel AME Church in Nashville, Tennessee. She is the Founder and Executive Director of the Faith Matters Network, a Womanist-led organization equipping community organizers, faith leaders, and activists. This is her first book, and in it she tells stories about her background in faith, as a Black woman and theologian, as an activist and multifaith leader, and as an advocate for healing divides.

Her memoir takes the form of letters she writes to friends and strangers. There is a letter to a motherless child in which she tells of her own mother’s death after a long fight with cancer. There is a letter to MarShawn McCarrell, who died by suicide on the steps of the Ohio Statehouse in 2016. There is a “letter of communal lament,” honoring Black lives cut short by the pandemic; and there are letters to spiritual leaders “on the edge”; “to the child in my belly”; “to my little cousins”; and “to my fellow foodies in search of a communal table.”

There is also a letter to a young griot (“griots” are storytellers and musicians who carry with them the oral history of West African peoples) in which Bailey writes: “It is my intuition that if we are to ride the waves of uncertainty toward the promise of a transformed world, we must speak and live the truth of where we have been and where we are going. Yet even the concept of truth is contested in this season, which is why I am calling on you.”

She writes to today’s reader, but also to her “ancestors”: her teachers who have died. She writes with “radical hope” inspired by generational wisdom she calls “grandmother theology.”

This reservoir of stories, memories, and messages is relevant to all of us, whether we are Black or Black allies, Christian or of some other form of faith and hope. To My Beloveds offers assurance that, if we stick together and love and listen to one another, we will be alright. 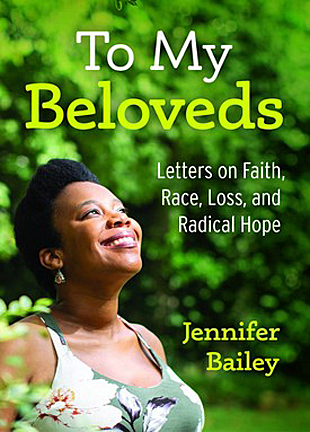