We Were Made for These Times Ten Lessons on Moving through Change, Loss, and Disruption

By Kaira Jewel Lingo
A Buddhist teacher and a book of wisdom for a time of transitions.

S&P's Contributing Editor, Jon M. Sweeney, had an "Off the Page" conversation with Kaira Jewel Lingo on January 25, 2022. Watch the video below.

The author of this book may be unfamiliar to you; this is her first. But she is already one of the most experienced Zen teachers resident in the United States.

An ordained nun for fifteen years, Kaira Jewel Lingo lived around the world and trained closely with her teacher, Thich Nhat Hanh. She is not a nun today — she even reveals here that she has recently had to learn online dating! — but she regularly shares Buddhist meditation, secular mindfulness , and compassion practice, mentoring individuals and communities working at the intersection of racial, climate, and social justice. She teaches in the Plum Village Zen tradition and in the Vipassana tradition with activists, educators, artists, youth and families, and Black, Indigenous, and People of Color (BIPOC) using art, play, and nature. She lives in New York.
We were drawn in with the opening quote from novelist Alice Walker, chosen by Kaira Jewel Lingo: “Some periods of our growth are so confusing that we don’t even recognize that growth is happening.” Over the next ten chapters, it becomes clear that discerning and nurturing that growth is Kaira Jewel’s gift.

Her background, explained to the reader at the outset, includes an interracial family and a deep dive into Christianity as a child, including monastic-style daily prayer, missionary work in East Africa, and extended visits to Mexico and Brazil while a teenager. At university, her religious horizons broadened further and she began to practice yoga and meditation. While working on a master’s degree at 23, she visited Plum Village for the first time and says: “I knew I had met my teacher as soon as I saw” Thich Nhat Hanh. She took vows as a nun of the community two years later.

We recommend her book for people of any religious background, or none. Chapter 1, “Coming Home,” refers to “Coming home to ourselves,” which can be accomplished when we practice mindfulness and “being present.” “Accepting What Is” and “Nurturing the Good” are two of the chapters (3 and 9) which one might grasp a bit by their titles.

Some of the chapters are strikingly original. For instance, chapter 5 — “Caring for Strong Emotions” — offers wisdom we don’t often find. Some of it comes from the teacher’s experience and some from her learning of Buddhist psychology. Consider these two quotations:

“If we keep allowing the seed of anger to be watered (either by ourselves or by our environment), we get stuck in a toxic loop that makes it grow bigger and bigger every day and we become trapped in a pattern of constantly getting angered by even small things that didn’t bother us before. This is detrimental to our body and mind; our nervous system was not designed to handle such stress.”

Lingo continues: “Once mindfulness recognizes anger, it begins to accept it and give it space. We open to our experience of anger and allow it to be here. We generate compassion for ourselves, recognizing anger is a part of us so we don’t want to reject or judge it. However, accepting anger doesn’t mean we give it freedom to cause destruction.”

Every chapter is full of spiritual practices. For example, chapter 4 includes a Plum Village song, a “Belly Breathing” meditation, and a step-by-step guide through a “Walking or Moving Mindfully” meditation.

Each chapter concludes with a journaling exercise and prompt. Chapter 1’s “Coming Home” includes these prompts: “What has been your experience of your true home? How do you find your way there?” 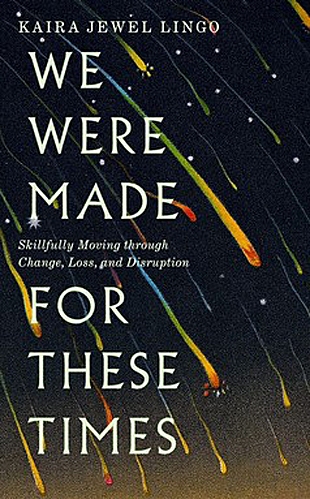