By Joy Harjo
A moving memoir of resilience and openness to spirit by the U.S. Poet Laureate.

Joy Harjo is the incumbent United States Poet Laureate, the first Native American to hold that post. She began her third term in September 2021. She has been a poet and musician for far longer and a member of the Mvskoke/Creek Nation since birth in 1951. She lives in Creek Nation in Oklahoma.

The stories of Harjo’s life told in this, her first memoir, are harrowing, painful, searching, deeply spiritual, and full of love. Her people and her family ended up in Oklahoma only because it was the end of President Andrew Jackson’s infamous “Trail of Tears” (1831 – 1877) — when Native Americans were forcibly removed from their ancestral lands, in what became the southeastern United States, to places west of the Mississippi River.

But Harjo doesn’t take much time recounting historical matters in this book. Her writing is very personal. Her stepfather abused her. Her birth father abused her mother. Harjo’s husband would end up abusing her, before she finally left him. Her mother inspired her to sing.

Harjo was raised in a nominally Christian home, and this conflicted with the Native ways she would learn. She reflects: “In church I was taught that anything visionary on a personal level, especially in girls or women, was evil and most likely of the devil. I became fearful of those abilities. I closed the door.”

But by 13, she rejected the Christianity she’d been taught. Soon she asked to attend an Indian arts boarding school in Santa Fe.

When Harjo describes her visionary, songwriting, poetic calling it is reminiscent of other famous Native voices, with references to visions and inspirations that seem almost magical or supernatural. “I was entrusted with carrying voices, songs, and stories to grow and release into the world, to be of assistance and inspiration. These were my responsibility.” She then adds: “I am not special. It is this way for everyone.”

But not everyone has such clarity of vision. Reading about Harjo’s experiences might help the rest of us. Her message for every reader is this: “We each have our own individual soul story to tend.”

Earth is her great teacher, as are her grandfathers and grandmothers. She reflects that when she was born, “I was … puny and female and Indian in lands that were stolen. Many of the people were forgetting the songs and stories.”

She respects mystery and practices compassion. There are no accidents in her world. She listens for the spirit that inspires and gives breath to all things.

Even as we watch her move through sometimes ordinary events of a human life — graduating schools, playing the Monkees and Motown, acting in school theater, experimenting with alcohol, self-mutilating with a knife, finding and losing boyfriends, marrying, losing control of a car, sitting with a psychic while feeling desperate, and giving birth to a son — Joy Harjo is listening.

She describes becoming a poet, after all these experiences: “In a fast, narrow crack of perception, I knew this is what I was put here to do: I must become the poem, the music, and the dancer…. This was when I began to write poetry.” 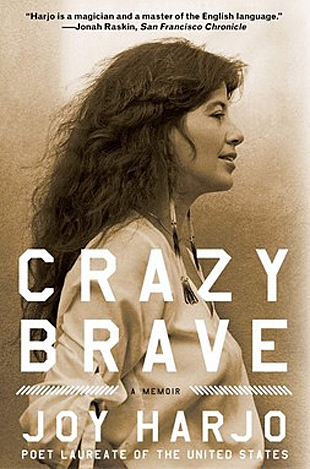