By Joy Harjo
A moving sequel to Crazy Brave by the U.S. Poet Laureate that should inspire others to discover their own stories.

Joy Harjo is the incumbent, now third-term United States Poet Laureate, and the first Indigenous person to hold the post. She has published many poetry collections and a previous memoir, which we loved, called Crazy Brave. Harjo is a member of the Muscogee/Creek Nation. She lives in Tulsa, Oklahoma.

Her stories are often painful but always deeply spiritual and full of compassion. In this book, she seems determined to pass along her passion for justice and loving others.

We meet her Aunt Lois, whose photograph is included along with several others in this book. Harjo reflects, “When I was with her, I knew I belonged, and that in this circle of belonging I had a place in the stories [she would tell]. Everyone needs this kind of place, this feeling of kinship; without it we are lost children wandering the earth our whole lives, without a sense of belonging.”

Harjo’s vision is expansive. It extends beyond death, which is not an ending. She writes: “I have asked my aunt, uncles, cousins, and others, all those with whom I sat, listened, and shared throughout this life, to be with me as I write.”

She was raised as a Christian, attending a Methodist church with her mother, but still as a child she began to seek out, instead, Indigenous ways of wisdom. She writes: “I liked to think without words about the meaning of life. When I was outside alone in the early morning hours, I learned to think spiritually. The trees, the earth, the sky, all the insects and creatures shined as exactly who they were. They did not have to concern themselves with burning in hell.”

We also meet her great-grandfather Monahwee, who was a leader among her people long ago, standing up to President Andrew Jackson and the soldiers who forcibly removed them to places west of the Mississippi River. We meet Harjo’s mother and her mother’s mother and learn that the two of them did not get along. Harjo’s mother taught Joy that she was a late bloomer, and Joy took this in, in the most positive of ways: “I have a tendency to hold back, to watch, to wait until I have clarity, a sure path,” she reflects.

When her mother died, Harjo inherited her iron cooking pot, which was special because it was brought over on the Trail of Tears. This causes Harjo to observe, “Some of the most important stories are not in words, not in poems or other forms of speaking, but in objects of use and beauty. This cooking pot is one of the most potent stories I carry.”

Those who have read her first memoir will have already “met” her father. He is here, too. In fact, we see his photograph as a boy. Her stepfather is here as well. Joy is forgiving of his faults, and the faults of everyone in her life. Writing memoir seems to be part of the process of healing in her life. “I do not want to be haunted by that which I cannot speak,” she says.

She tells of how poetry began to grow in her, and of when she first began to read the poetry of others. Emily Dickinson influenced her first. Harjo writes: “I liked to read aloud to myself: ‘I’m Nobody! Who are you? / Are you—Nobody—Too? / Then there’s a pair of us!’… Emily’s poems told me she too found herself with words.” There are also stories of Harjo reading her poems with other great poets around the world, on the stages at great poetry festivals. “Poetry is a tool for navigating transformation,” she says.

The final two parts of the book are titled “Teachers” and “Sunsets.” Among her teachers are snakes, and others that are surprising. “Sunsets” is, in part, a reflection on death, most of all the death of Joy’s mother in hospice with Joy at her side. There are many poems in these pages, including a beautiful, compassionate, and poignant one, “Washing My Mother’s Body.” Then the book ends with Harjo’s thoughts on her own “sunset place in life,” and once again she is full of hope. 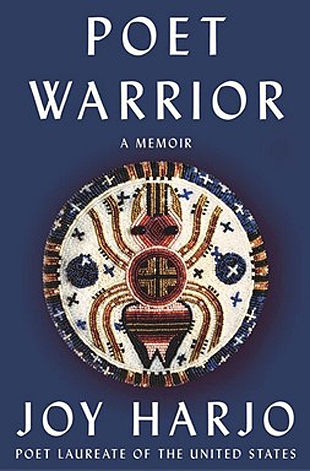