By Rachel Held Evans, with Jeff Chu
A lifeline for disenchanted Christians.

Rachel Held Evans began as a simple blogger. She then turned to books, writing five of them in a short amount of time, including a New York Times bestseller, Searching for Sunday: Loving, Leaving, and Finding the Church, in 2015.

Her journey was significant, as she chronicled beginning in the church as a straight, white, Southern, evangelical Baptist woman, to becoming inclusive, welcoming, liberal, and Episcopalian. She also wrote very well. So she was highly sought as a conference speaker and writer. But then Held Evans abruptly died less than four years after that bestseller, at the youthful age of 37, leaving what felt like a gaping hole in the world of Christians — mostly disenchanted evangelical and post-evangelical Christians — trying to find a new way of faith.

This book began with Held Evans and was brought to the finish by coauthor Jeff Chu. He is one of perhaps hundreds of those post-Christian writers whom Held Evans reached out to help. She was known to use her celebrity for others and not for herself. “She had a particular desire to boost those of us who had typically found ourselves on the outskirts of the church, whether it was because of racism, homophobia, misogyny, ableism, transphobia, or some other unjust bias against an aspect of our identity,” Chu writes in the introduction.

The voice of Wholehearted Faith is that of Rachel Held Evans. Chu has done a good job of letting her continue to tell her stories, without inserting himself. Instead, Chu asked her father, sister, and husband to help fill in gaps of storytelling, so that the voice remains Rachel’s. This is her memoir.

Her readers will know that voice: “Some days and some nights, I am too tired, too discouraged, and too overwhelmed by all the beauty and all the evil of this world. I am too overcome by the thought that I am willingly subjecting a child to such wonder and such horror, and I don’t want to think any more about it.” At her death she left behind two children plus her husband, Dan Evans.

She writes about how she doesn’t know everything about God and faith, nor does she pretend to. She writes of how she has had to learn how to have a thick skin and a tender heart.

She takes on some of the hot-button issues of Christian evangelicalism, suggesting — always with humor and generosity — another way forward. She refers often to her own struggles and sin (she definitely still uses traditionally Christian words like “sin” — see the excerpt accompanying this review) and doesn’t ever separate herself from others in the way that both conservatives and liberals tend to do that to each other.

This is a most generous book from a most eloquent Protestant Christian writer. We are fortunate to have it as her last word. 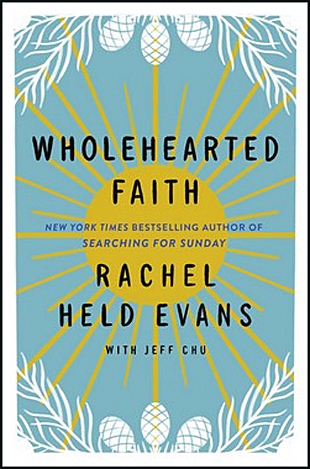