By Jennifer Prugh
A beautifully written and photographed account of the importance of the sacred Ganges River in South Asian devotional life.

Jennifer Prugh is the founder of Breathe Together Yoga, two studios, a wellness center, and a teahouse in Silicon Valley, and the JOY of Yoga School of Integrative Learning. With eight years as an Associate Professor where she taught storytelling, storyboarding, creativity, and mythology, and ten years as a professional artist, Prugh is passionate about making traditional yoga and mind/body practices accessible, so that students are enabled to develop consistent personal practice that supports a meaningful life.

What began for the author as simply a trip to India in 2007 to deepen her understanding of her yoga practice opened up into a broad look at the ancient spiritual culture of India. Over the next ten years, she made a series of pilgrimages, each going to a section of the river Ganges -- from its source in the Himalayas, to the Kumbha Mela festival held in Allahabad, to the cremation ghats in Varanasi.

India's most sacred river, stretching some 1550 miles, is revered by Hindus as Mother Ganga, the Goddess. She is believed to dissolve sins, cure the sick, and for those who die on its shores, freedom from the cycle of life and death. For Prugh, the river becomes a gateway to an appreciation for many aspects of South Indian devotional life. This gorgeous book includes her color photographs revealing the richness of these traditions.

"Ganga is a lifeline for roughly seven percent of the world's population," Prugh notes. A fire ceremony on its shores has taken place there every night for 2,000 years; it is "an elaborate expression of one's complete and unflinching devotion to God." In another ceremony practiced for thousands of years, people bed the gods down for the night.

Prugh gifts as a writer are evident throughout the book, just as her photos document her keen eye. We were impressed by the author's ability to discover wisdom in small places. For example, a sign at a Tibetan Nehru Memorial Foundation School reads: "Come to Learn. Go to Serve." Few things escape her notice.

Here are just a few of the things you can learn from this gifted and observant spiritual teacher:

Whereas Prugh's vivid descriptive paragraphs, her sharing of stories from the people she meets, and her commentaries on the great Hindu epics all help us connect this tradition to the contemporary yoga movement, her photographs are what really bring us to a visceral appreciation for the "River of Offerings." Paging through this book, we are captivated by the vibrant colors in clothing, statues of the gods, and temple buildings and grounds. Faces greet us -- boys on the beach, village women gathered around an elder, monks debating, a crowd in the market. And our eyes return again and again to images of the sacred river and its many moods.

This book itself is an offering to Ganga and a blessing to its readers. 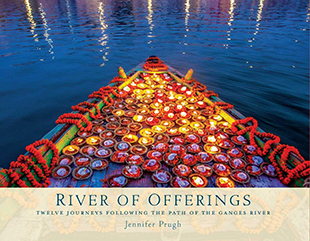