By Nora Guthrie, Robert Santelli
A personal look at one of the great singer-songwriter spiritual activists of the last century.

There are songwriters and musicians who reach more people with spiritual practices than could be reached by a hundred books of religion and spirituality. Woody Guthrie was one of these.

He was born in Oklahoma in 1912, when the state was brand-new. His people were poor to middle class. His mother was thought to be insane, but in fact suffered and died from Huntington’s disease, a neurological disorder that Woody inherited and died from in 1967.

He grew up listening to Gospel tunes and the blues of Black laborers he sometimes worked beside. Once he learned to play the guitar and harmonica, he began, insatiably, to write songs. By some accounts, he penned as many as 3,000 folk songs, the most famous of which is “This Land Is Your Land,” written to counter the exceptionalism of “God Bless America.”

His greatest influence was on Pete Seeger, Bob Dylan, and Bruce Springsteen — deeply spiritual practitioners of the singing-songwriting arts, all.

This big book was curated by his daughter Nora, president of The Woody Guthrie Foundation, and award-winning music historian Robert Santelli. It contains journal jottings, forgotten lyrics, letters written in pencil (shown as illustrations), and short articles by Woody and about Woody, reflecting his values, which were generous, merciful, and focused always on justice.

Guthrie stood up for the poor and the downtrodden. He told their stories and cried out against the injustices that led to so many of their troubles. For example, the authors tell us, “In the late 1930s, Woody often sang and played at migrant camps for ‘Okies’ [Oklahomans who were in California as refugees during the Dust Bowl] living in cars, tents, and shacks, as well as for those living in the workers’ housing communities newly created by the Farm Security Administration. He also performed out in the fields with actors Will Geer and Cisco Houston, creating agitprop theater promoting an agricultural workers’ union.” And then the photographs of these events make this book a documentary.

There was also the time: “In 1950, the Guthrie family moved into the Beach Haven apartment complex in Brighton Beach, Brooklyn, which was owned and operated by Fred Trump. When Woody discovered their racist rental policies, he wrote damning songs and essays about them.”

One of the great pages in this book is a full-page photographic reproduction of a typewritten sheet of paper on which Woody laid out the lyrics to his song “You Fascists Bound to Lose” with his pencil notes and jottings all over the page.

There are never before published lyrics and poems here, too, some that may never have been set to music or performed, such as:

“I cannot help
But learn my most
From you who count yourself least
And cannot help
But feel my best when
You that need me most
Ask me to help
You
And I never did know exactly why this was
That is just
The way
We are built.”

He became famous, was on television, made albums, and performed widely. He wrote an autobiography, Bound for Glory, that received wide acclaim. This was scripted for the big screen back in the 1970s, and we reviewed it here.

Woody’s son Arlo writes about his dad’s spirituality in the last chapter of this book (see the excerpt), and he quotes his dad as saying: “I got me sort of a one man religion. My religion is so big, no matter who you are, you’re in it, and no matter what you do you can’t get out of it.” 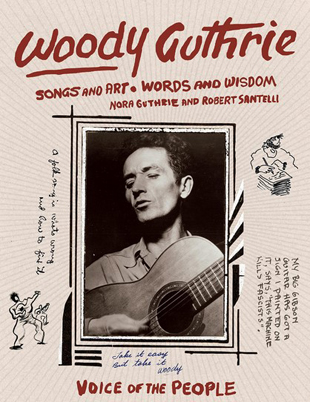