Heaven Is a Place on Earth Searching for an American Utopia

By Adrian Shirk
Desires for a more perfect world that result in communal living.

Utopia is, as Adrian Shirk explains philosophically in her book, “any gesture that points to a better future.” Human beings have felt drawn to utopian experiments in communal living for as long as we have kept track of religious movements and history. Shirk’s book documents many of these, focusing on the United States.

She looks closely at Harmony, Pennsylvania, for instance, where a German Christian theosophist named George Rapp started a community of people in 1805 who called themselves “Harmonists” and at the infamous utopian city in Oregon, Rajneeshpuram, led by the guru Bhagwan Rajneesh in the 1980s.

Her history of American experiments touches as well on a hundred other examples, from Shaker communities to Thomas Merton’s Abbey of Gethsemani to the Oneida Community, founded in upstate New York in 1848 by eighty-some people who, as in many similar communities, held property and possessions in common and forbade marriage and sexual activity. They believed such measures might lead to perfection in human life.

In each case, Shirk’s analysis is that of a fellow traveler — what some would call a pilgrim — rather than a scholar or journalist. She’s passionately interested in the dreams and plans that people make and attempt. She often shares these, as when she explains: “It seems to me utopianism is almost always responding to the same things: capitalism, war, tyranny, inequality, persecution, the impending end of the world, or a belief that the world has already ended.”

Weaving throughout the book is the story of Shirk and her husband, a theology PhD student at Fordham University, starting their own small utopian community experiment near where the New York City borough of the Bronx borders with the city of Yonkers. She describes her own religious background with a mix of Christian influences (using names such as Catholic Workers, Jesus People movements, the Amish, and the Oneida Community, which believed it was doing what Jesus started) and how she came to want something more or something else.

Shirk and her husband’s desire for utopia began with discussions of what sort of life they wanted to have: “the open home, the loosely organized gathering space, a residency or low-cost misfit boarding house, the multi-structure commune, the low-overhead community life, something like this.” This is probably where many utopians begin their journeys.

There’s apparently been an uptick in utopian dreams among residents of the United States. Shirk speaks of the numbers of actual participants nearly doubling in the last decade, with a total “somewhere around 100,000 known communitarians, many of whom are my millennial peers.”

She also says: “The pursuit of utopia is, at its heart, about our relationship with time. Utopians sit around dreaming about the beginning and the end, as a way to decide what to build in the present.” A typical utopian community aims to heal societal problems with great intentions, but it almost always goes wrong somehow. As Shirk says, “Leaving is always a crucial part of the utopian story.” And then later, acknowledging her own involvement in utopian dreaming: “I did not come here to tell a happy story.” 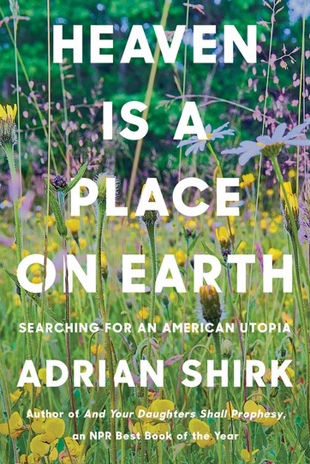