Thomas Merton, Lawrence Ferlinghetti, and the Protection of All Beings The Correspondence

By Bill Morgan
Poets who wrote to liberate others.

They were very different in circumstance, Ferlinghetti living a poet’s life in the city and Merton behind a monastic wall of separation from the world. But they shared many interests, qualities, and acquaintances. For one, they were both raised in France. For another, they both used the writing of poems to express and exercise their spirituality.

There is also a third character central to this story: James Laughlin, the founder and publisher of New Directions. Merton was a poet published by Laughlin before he became a monk. Then his 1948 autobiography The Seven Storey Mountain sold a million copies. Ten years later, New Directions published Ferlinghetti’s A Coney Island of the Mind, which also went on to sell a million copies — an astounding figure for poetry. It was James Laughlin who, promoting the work of his authors, kept Merton and Ferlinghetti abreast of each other’s work and activities before they began to talk directly to each other.

Other Beat poets make appearances here too, including Allen Ginsberg and Gregory Corso. Author Bill Morgan is an expert on the Beats. He’s also the author of one of the best biographies of Ginsberg. Popular religious figures such as Chogyam Trungpa Rinpoche and D. T. Suzuki are also discussed.

At the beginning of the Merton-Ferlinghetti correspondence, which is the focus of the book, Ferlinghetti wrote to Merton saying: “I am a (non-practicing) Catholic, myself … and you might be surprised to hear I wrote you about ten years ago about some question of consecrated virginity in Hildebrand’s 'Marriage.' Got a note back from a secretary in return.”

Central to their relationship is the publication of Merton’s most powerful poem, “Chant to Be Used in Processions around a Site with Furnaces,” which appeared in The Journal for the Protection of All Beings, published by Ferlinghetti’s newly formed City Lights Books. Merton’s letters tell of struggling with the Catholic censors who monitored his work, and Ferlinghetti’s letters tell of the excitement surrounding such a powerful antiwar, antifascist poem.

Merton sent the poem also to his friend Dorothy Day, who then promptly published it in the Catholic Worker, also without censor approval, which led Merton to write Ferlinghetti apologetically, saying wait no longer, then adding, “I will take responsibility with my Superiors for whatever follows.” (He did get into trouble.) There is courage in this correspondence, which one doesn’t often associate with writers.

But it is their respect and friendship that is most inspiring — and how both were dedicated to using art to help others, to liberate others, and in their own unique and complicated pursuits of holiness. Merton died accidentally in 1968. Ferlinghetti died in 2021 at the age of 101.

An added bonus are the black-and-white photographs sprinkled throughout the book, including one of the rare 1961 cover of The Journal for the Protection of All Beings and another showing a original hand-written letter from Ferlinghetti. The complete four-page poem of “Chant to Be Used” is also reproduced here. 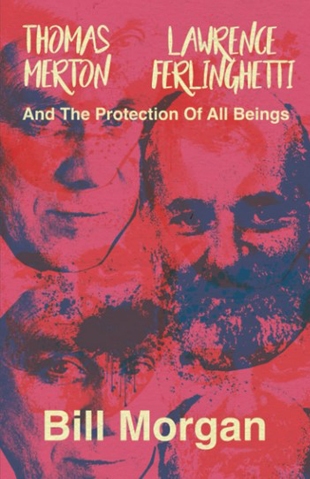