The Death of Sitting Bear New and Selected Poems

By N. Scott Momaday
Words for loving and singing to the Earth and each other.

We do not review many books of poems, but this deserves attention from anyone seeking to live with attention and spiritual practice today. Here one finds an internationally renowned poet and storyteller at his best, showing how words are sacred and how they evoke love, honor losses, and remind us of what matters.

The poet, N. Scott Momaday, is no stranger to Spirituality & Practice. We have reviewed books that include his reflections on the power of stories and giving honor to the Earth. In this collection one finds his best poems.

The second verse of “Prayer for Words” speaks of life’s origins, gratefulness, mystery, and messiness:

“Had I words I could tell of origin,
Of God’s hands bloody with birth at first light,
Of my thin squeals in the heat of his breath,
Of the taste of being, the bitterness,
And scents of camas root and chokeberries.”

This same poem ends: “… I could / Articulate the night sky, had I words.”

Always, Native tradition informs Momaday’s lyrical understandings. He is of the Kiowa people, longtime resident in Arizona and Oklahoma, and ideas from Pueblo and Navaho traditions are also among his many sources. Momaday has also been a tenured professor at four universities, including Stanford, and he once won the Pulitzer Prize for fiction.

We loved this poem, which seems to sing to ultimate mystery. It is playfully titled, “A Couplet in Tongues”:

“She spoke a language known only to God.
God gave a nod. Nothing to God is odd.”

Wildernesses of endless sky and dark forests are places that inspire Momaday. At one point, he writes of these, “The sacred here emerges and abides.”

He speaks of, and sings to, what he knows — which includes advancing glaciers, stallions on the skyline, sudden downpours, fireflies that “stitch the sky,” and canyon rims. He writes, “… I have seen / The edge of a sacred world.”

But the poet’s creed is perhaps summed up most distinctly in the final four lines of a poem called “To An Aged Bear.” These are lines that show that he writes not only for himself, but for others:

“Translate yourself to spirit;
Be present on your journey.

“Keep to the trees and waters.
Be the singing of the soil.” 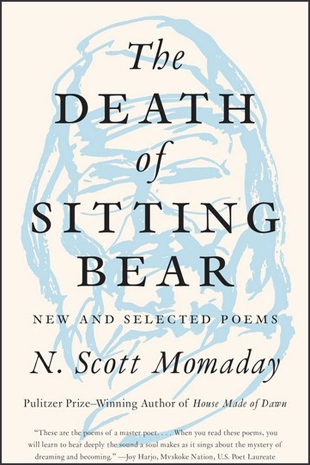