The God Who Riots Taking Back the Radical Jesus

By Damon Garcia
A portrait of Jesus that looks unfamiliar to many Christians.

This is a would-be activist’s book, written by an activist. Former pastor Damon Garcia begins by talking about the moment in 2017 when he realized he needed to quit his job because his coworkers in ministry did not see what he saw: radical inequalities of income, police brutality toward people of color, white supremacists and white nationalists who claimed to be Christians, and many other reasons not to sit still.

Garcia, a Mexican-American who grew up Christian, writes: “I left the church…. But leaving that church didn’t feel like I was leaving Jesus. It felt like I was following Jesus into something bigger.”

Garcia is popular on TikTok and YouTube, posting videos challenging Christians and others to fight for justice in their communities. He does this, he says, as a follower of Jesus, and this book is about painting a portrait of Jesus that may be unfamiliar to many Christian believers — but perhaps it shouldn’t be.

Garcia aims at “taking Jesus and reshaping him to empower the work of liberation” and shows how “this calling has been embodied throughout Christian history.” His is a work of decolonization; it is personal for him, but it is also relevant for any Christian.

His book offers a view of Jesus as God who upsets the status quo, challenges inequalities, and partners with the oppressed against the oppressors. Many Christians know Jesus as God who primarily wants to save their souls. Garcia says, near his book’s end, “Jesus doesn’t call people to escape this world, but to transform it. His death on the cross is a consequence to living a life devoted to radical transformation…. He was executed in public on a hill, so everyone could see what happens to those who challenge the rule of Rome.”

Garcia wants Jesus-followers to become, like Jesus, agitators and disruptors, fighting for those who have been left behind by systems of injustice and inequality — that are often held up by those who misread the Christian gospels as if the purpose of faith is peace and harmony. 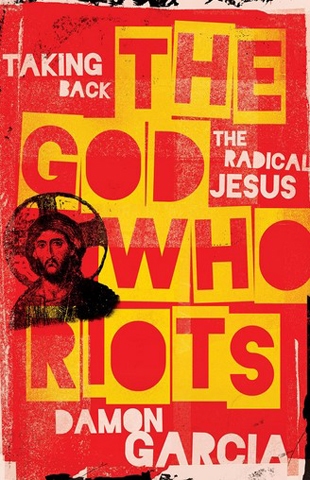