God in the Balance Christian Spirituality in Times of Terror

By Carter Heyward
Challenges us to become warriors for peace and mutuality in a world caught in a vise of escalating violence.

"In this small volume of essays, I am suggesting a path for a Christian spirituality that may help us in a world in which absolutist doctrines and ideologies — including fierce nationalisms and culturisms — are at war for our bodies and minds. It is important for us to learn spiritually how to bend and sway, how not to go rigid, in the face of terror. The last thing the world needs is more self-righteousness among people who know that their way, or our way, is not only best but God's way and the only way for humankind," writes Carter Heyward, Howard Chandler Robbins Professor of Theology at Episcopal Divinity School, Cambridge, Massachusetts.

The context for her discussion is the post-September 11 world in which we live. Although the author is an unswerving opponent of terrorism, she is convinced that many Americans still do not understand that other nations are right to single out and question the violence in the foreign and domestic politics of the United States. Heyward mentions the Middle Passage, the Trail of Tears, the bombs that fell on Hiroshima, My Lai, and the massacre of civilians in Chile when the U.S. sponsored a coup in 1973. The shadow side of America remains a stumbling block to most citizens who don't want to consider these and many other examples of state-sponsored terrorism.

Heyward is hopeful that 9-11 will help Christians and others see that the terror that has become our day-by-day milieu need not send us into feelings of paranoia and despair but rather engender within us a sense of deep connection with the suffering of others. The author begins with a substantive discussion of six images of God (God of War, God of Peace, God as Father, God as Spirit, God in us, and God in all). Critical of the limitations of patriarchal traditions, Heyward finds the image of God as Spirit to be the most capacious and meaningful for our times with its emphasis upon inclusivity, nonviolence, and mutuality. The last term is of great importance to the author since "the only way to win the fight against powers of domination — including terrorism — is to struggle mutually, with other nations and across cultures, toward building societies in which sharing resources on the basis of ability and need provides a moral foundation for us all. . . . Clearly, the war on terrorism must be waged primarily as a struggle for economic and social justice — a struggle for radical mutuality."

We were quite taken by Heyward's commentary on being a good warrior — one struggling alongside others for peace. This quest takes a great deal of passion, commitment, and sensitivity. We also liked the author's characterization of terrorism as evil "because it has no place for enemy-love," which she defines as "respecting the basic rights and dignity of even those whom we hate." With a last surge, Heyward calls upon Christians to fight the good fight against the powers of domination, including not only the murder of innocent civilians but also "our ghastly system of criminal injustice, including capital punishment." Her closing salvo is a plea to stop the escalating war on animals, the destruction of other creatures for our use and satisfaction. 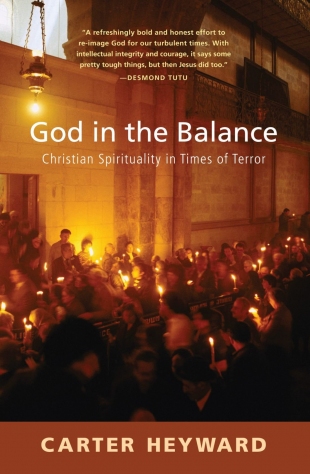