God Makes the Rivers to Flow Sacred Literature of the World

By Eknath Easwaran
A prime example of interspirituality as the path of the future.

Eknath Easwaran (1911-1999) taught meditation and the spiritual life for more than 30 years. Born in India, he came to the United States on a Fulbright exchange program in 1959 and two years later, established the Blue Mountain Center of Meditation in California. More than 25 of his books have been published, revealing this erudite and compassionate spiritual teacher's unique blend of Eastern and Western wisdom for the path of love and service.

This gathering of literature of the spirit contains passages chosen by Easwaran for daily meditation, a key practice in his Eight-Point Program for the spiritual life. The author notes in the beginning: "This book is a very personal one. It itself is rather like a river, flowing through a country which is home for all of us but which very, very few have seen: the land of unity, in which all of creation is one and full of God. There are no boundaries in this land. Those who dwell in it live in a timeless realm beyond distinctions: Mahatma Gandhi in the company of Saint Teresa of Avila and the Compassionate Buddha, Rabbi Abraham Isaac Kook with Thomas a Kempis, David the Psalmist with the anonymous composer of the Katha Upanishad."

There are selections from Buddhism, Christianity, Hinduism, Islam, Judaism, the Native American and Taoist traditions, and from writers including Kabir, Rumi, Seng Ts'an, Hazrat Inayat Khan, Saint Francis of Assisi, Brother Lawrence, Swami Ramdas, Hildegard of Bingen, and many others. Easwaran sees this spiritual collection as "a lectionary of the perennial philosophy." They are arranged in three sections: Part 1, "At the Source," features mystics from diverse traditions marveling at the divine source within; Part 2, "Deep Currents," highlights spiritual yearning and prayers focusing on compassionate love, and Part 3, "Joining the Sea," delves into the merging of the self with "the measureless sea of Reality called God."

This third edition of God Makes The Rivers to Flow is highly recommended, even if you already have an earlier edition, as it contains many new passages. There is also a helpful piece titled "How to Use This Book" with suggestions on passage meditation, brief descriptions of sources and biographies of writers, an outline of Easwaran's Eight Point Program, and a section on "Using Inspirational Passages to Change Negative Thinking" that identifies good choices for dealing with anger, procrastination, fear, jealousy, and more. Easwaran was a pioneer into the age of interspirituality and this resource shows the way. 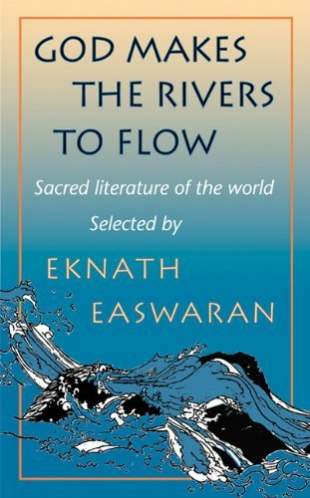