Somebodies and Nobodies Overcoming the Abuse of Rank

By Robert W. Fuller
A watershed work calling for a dignitarian movement based on reverence for the personhood of all people.

The ideas in this watershed work by Robert W. Fuller were developed from his experiences as a father of four, a student, a teacher, a college president, a world traveler, a citizen diplomat, and an observer of international affairs. At the outset, he notes that the worst form of torture in China for many centuries was called "a death by a thousand cuts." Today, the hearts, minds, and souls of millions of people are scarred and irreparably damaged by rankism — the shabby treatment of someone by a person in power.

Fuller finds such assaults on dignity taking place every day in a thousand ways when a boss humiliates an employee, a coach bullies a player, a teacher disdains a student, a resident of a building shames a doorman, a parent dumps all over a child, or a police officer violates the rights of a suspect. The author is convinced that racism, sexism, anti-Semitism, ageism, and many other isms are subspecies of rankism. He calls for a dignitarian movement to counterbalance the excesses of this disturbing phenomenon. "Rankism erodes the will to learn, distorts personal relationships, taxes economic productivity, and stokes ethnic hatred. It is the cause of dysfunctionality, and sometimes even violence, in families, schools, and the workplace."

Fuller has no animosity toward earned rank, such as the joy and fulfillment that comes to a person who has spent years honing a skill and is rewarded for his or her achievement of excellence. He is against those who use their power and status as a weapon against others. Although the American democracy was originally set up to limit the power of those in political office and make them accountable to those whom they govern, the trend toward plutocracy has made most Americans feel like nobodies compared to those with wealth, privileges, and power. The rich who have unequal resources are able to buy their way out of prison terms while the poor can't even find decent representation.

These examples of egregious rankism are reinforced by the media's lionization of celebrities and heroes. They are considered somebodies with prestige while the rest of us can only wonder when our fifteen minutes of fame will happen. This makes for a lot of unhappiness when the nobodies tally up the number of times they have been treated like a zero. In this anatomy of disrespect, Fuller points out, deep feelings of self-disgust can lead to random acts of violence.

The author concludes: "The notion of rankism lies at the nexus of morality, civility and civil rights." A dignitarian movement would reverence the personhood of all people and move beyond the power plays and domination moves of individuals, groups, institutions and nations. See Fuller's "The Nobody Manifesto" (in the excerpt). Then do your bit to eradicate rankism from your home, workplace, and community. Instead of death by a thousand cuts, let's practice the ethics of reverence and let a thousand new flowers of personhood bloom! 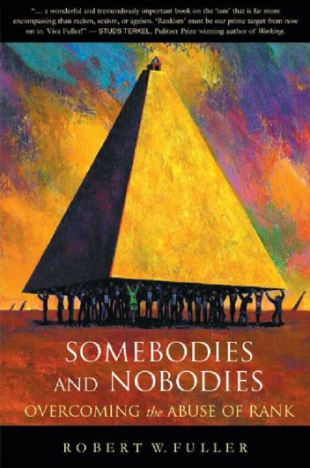