By Sharman Apt Russell
Pays tribute to these beings who draw out our wonder and remind us of beauty and transformation.

Sharman Apt Russell teaches writing at Western New Mexico University and at Antioch University in Los Angeles, California. She is the author of Anatomy of a Rose, which we found to be an enchanting work of particular clarity and creativity. Her sense of humor is much more evident in this quirky and entertaining work. For example, here's the way she describes the enthusiasm butterfly lovers bring to their hobby: "In the second movie of the Jurassic Park series, actor Jeff Goldblum is once again trapped on an island filled with dinosaurs. As the other characters admire a herd of triceratops, Goldblum says dryly, 'Ooooh! Ahhhhh! That's how it always starts. But later there's screaming and running.' Ooooh! Ahhh. That's how it starts. Later there are guidebooks and more guidebooks and picnics in meadows and screaming and running."

There are some 18,000 species known as butterflies, and they appeal to millions even though their practical worth to the planet is low. Only a few flowers would miss them if they were gone. But human beings, says Russell, would be distraught. "More than any other group of animals, butterflies look as if they were designed in art school." We would miss their ephemeral beauty. Their colors stun our senses, and we pay attention. And that's really something given all the other pretty faces competing for our attention! Russell explains the life cycles of butterflies and their habits of eating, mating, and migrating. And she ponders some of the insights garnered from scientists who study them.

Then, of course, butterflies are important because of their distinctive connection to transformation: "And we, who live by myth, who live in fear of change and in fear of death, are privileged to see this metamorphosis over and over, a common thing, an everyday thing for a fat green 'worme,' a bag of goo splotched with yellow, to transform into a Western Tiger Swallowtail, fluted and glowing. The French naturalist Marcel Roland said that butterflies gave us 'solace for the pain of living.' "

Open this wonderful little book and discover the many ways and diverse reasons why butterflies have been appreciated over the centuries. By the end, you may want to go running through the nearest meadow exclaiming "Ohhh! Ahhhh!" 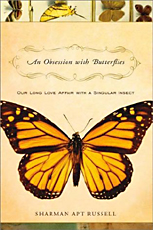