By Thich Nhat Hanh
Opens our hearts, minds, and bodies to the many ways we can water the seeds of love and peace in our lives.

This stirring collection of essays written over the last two decades by monk, poet, and peace activist Thich Nhat Hanh contains his responses to violence and killing from Vietnam to the Persian Gulf. In the spirit of Gandhi and Dr. Martin Luther King, he proclaims the powerful medicine of nonviolence as a healing force in a world where hatred makes enemies of brothers and sisters. The opening piece, a play called "The Path of Return Continues the Journey," pays tribute to the five young Buddhists at the School of Youth for Social Service during the Vietnam Sar. Thich Nhat Hanh has the same feelings of grief for the American veterans of that senseless conflict who bear in their minds and bodies the toxins of anger, hatred, and murder.

In one of the most effective essays, the author ponders the words of Jesus on loving one’s enemies while pondering the losses of the Gulf War. Whether writing about the path of harmlessness, simplicity, or the human family, Thich Nhat Hanh‘s message of watering the seeds of love and peace comes across as manna in the wilderness. For example, here is a personal anecdote that really touches the heart:

“Several autumns ago, I walked up to the pine tree in my backyard and asked it one question: ‘What is institutional violence?” The tree did not answer right away. So I sat at its roots and waited. The backyard was covered with brilliantly colored leaves, the air was fresh, and suddenly I forgot that I was waiting for an answer. The tree and I were just there, enjoying ourselves and each other. After sitting for a long time, I turned to the tree, smiled, and said, “I no longer need an answer.” Then I thanked it and awarded it the Grand Transnational Peace Prize.”

All things are interconnected and we can nurture peace and be nourished by it anywhere at all. 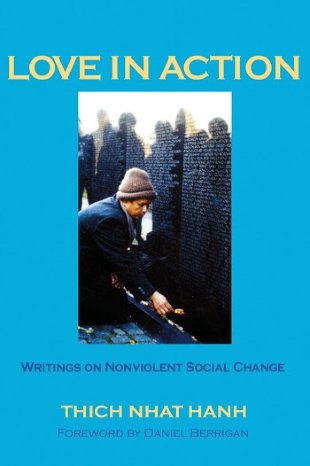