Return to Stillness Twenty Years With a Tai Chi Master

By Trevor Carolan
Reveals the bounties of this discipline that brings peace, calm, and grace to the routines of his life.

Trevor Carolan regularly writes on East-West arts and culture for Shambhala Sun, Choice, Kyoto Journal and other periodicals. In this carefully constructed and gracefully elucidated work, he ponders what he has learned in more than twenty years of study of Tai Chi, meditation, and traditional Chinese healing under the guidance of the late Master Ng Ching-Por in Vancouver’s Chinatown. These chapters offer what the Japanese call “palm of the hand” tales about the beauties and the bounties of Tai Chi and its practice.

Carolan introduces this ancient path with these words: “Somewhere in the mists of early China, men and women first discovered the mystic dance of the heron and the snake, the dragon, tiger, and monkey. Over time, this nature wisdom evolved as a way of living gracefully and mindfully in the world — into the practice of Tai Chi — and people have followed it ever since, surely with good reason. Increasingly, as more and more people in the West seek to emulate this ancient discipline practice, they recognize it also becomes a path toward achieving balance in mind, body, and spirit.”

The author is accepted as a student by Master Ng Ching-Por and learns that it will take ten years to learn the whole Tai Chi. He begins with a realization that practice is all important: “Between the special moments of Big Awakening are many daily experiences that, at best, may only be small awakenings. These constitute the mainframe of any path to self-realization. Keeping at our practice requires a different level of commitment than most of us are used to. It means breaking the bad human habit of slacking off. No excuses accepted.”

Carolan describes the five animal spirits (heron, dragon, monkey, tiger, and snake) that are dharma guardians and the five animal-inspired series of movements in Tai Chi that enhance physical energy and dispense muscular stiffness. He sees this discipline as a matter of imprint patterning where the student diligently does what the teacher does until it becomes quite natural and flowing. As Master Ng Ching-por tells him: “Don’t think. Only move.”

In the long run, Carolan comes to appreciate Tai Chi as “the containment and release of energy at just the appropriate moment” and he is able to apply this craft to relationships, to poetry, to chores. After twenty years of practice with a Tai Chi master, the author cherishes the peace, the calm, and the measure of grace in the rhythms and routines of his life. 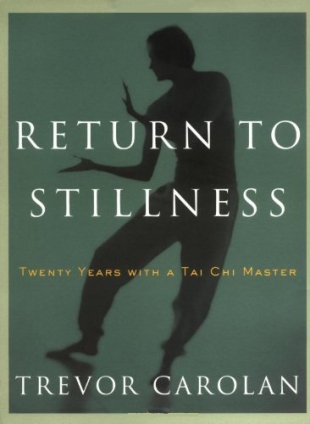