By Michael Moore
Salvos against the Bush administration and offers hope to those who still believe that a new day is coming.

Michael Moore's Stupid White Men has sold more than four million copies worldwide. Only the Harry Potter books have beaten it in the global arena. Being a prophet when you are rich is a heavy burden, as many rock musicians who criticized the culture in the 1960s found out. It's not impossible, but wealth does change the way people look at you and hear what you say.

That said, Moore returns with some brash new salvos against President Bush's lies to the public, the so-called "War on Terrorism," the cozy relationship of the Bush administration with Saudi Arabia, and the Horatio Alger myth. The always inventive author ends his vituperative volume with three zippy chapters on the liberal bias of the country, a clever bit on how to talk to your conservative brother-in-law, and a call to get out there and work for a regime change in the United States.

President Bush started all the talk about "evil-doers" after September 11, and the lingo has spread like wildfire. The "us" versus "them" scenario is very popular with people who like to point their fingers at others. Moore will have none of that. He suggests, as have many spiritual teachers, that Americans take a hard look at the evil we've created in the world. He also points to the large number of homeless people on the streets and the swelling ranks of hungry children in the United States. And he makes this point: "One sure-fire way to makes us REALLY safe would be to destroy the weapons of mass destruction still in the hands of the nation that has killed more people with them than all other nuclear nations combined." Philip and Dan Berrigan and many courageous Catholic nuns and priests spent years in prison protesting America's nuclear stockpiles. And yet we continue in this madness of calling other nations evil because of their efforts to copy us.

Michael Moore — bestselling author, Academy Award-winning documentary director, and millionaire — still can make us uncomfortable with his unusual mix of sharp-edged humor and incisive insight into some of the major issues of the day. He refuses to be downsized and sends his barbaric yawl out across the rooftops. 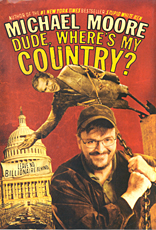