The Sacred Art of Bowing Preparing to Practice

By Andi Young
Presents this sacred art in many different religious traditions.

This book marks the debut of a new series from Skylight Paths called "Preparing to Practice," designed to explain little-known or misunderstood spiritual practices from around the world with clear instructions for incorporating them into your daily life. Future volumes will cover chanting, mantra, drawing, prayer tools, and illumination (uses of candles, menorahs, light-sharing ceremonies).

The Sacred Art of Bowing is written by Andi Young, a resident at the New Haven Zen Center and a member of the Kwan Um School of Zen whose founding teacher was Zen Master Seung Sahn. The author begins each day with 108 bows and is very knowledgeable about this spiritual practice, which is found in Buddhism, Christianity, Judaism, Hinduism, and Islam.

In the Zen tradition, meditation usually begins with a bow. One also bows when entering or leaving a temple, at an altar, or in the presence of a teacher. In Protestant Christian denominations, people bow their heads in prayer or kneel as a sign of submission before God. Eastern Orthodox believers bow when entering a church or during the liturgy while Catholics genuflect when entering or leaving church. Bowing in the Jewish tradition is linked to adoration and reverence for God. Young does a fine job explaining the sequence of bows in the Islamic ritual prayer, called salat, and in the namaskar greeting used by Hindus for teachers, holy places, friends, and strangers.

Although bowing has a particular meaning in each tradition, there is a universal effect of this practice. "Bowing, in its simplest terms, is a change in physical attitude, usually meant to indicate humility and respect," writes Young. "All religions specify moments during formal worship and ritual when we should punctuate our inner state with physical action. Bowing is intimately connected with the ways in which we cultivate our faith and our hearts, because bowing is never meant as an empty gesture, to be done without awareness or intent. Instead, bowing is meant to call us to greater awareness of our thoughts, emotions and intentions."

Bowing as a physical prayer can become part of your private, informal spiritual practice or can be used in sync with others in community worship. The rich meanings that inform this act include devotion, humility, generosity, reverence, gratitude, and joy. The Sacred Art of Bowing is an auspicious start for what promises to be a fascinating, practical, and edifying series. 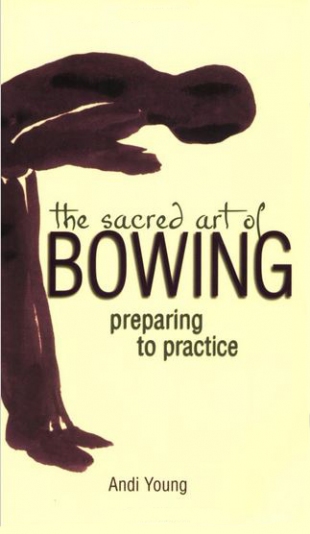