By Joseph Epstein
Explores this toxic emotion with wit and verve.

Envy is one of the seven deadly sins and almost everyone who has written on the subject agrees it is a nasty piece of business. We seem to be especially infected with this toxic emotion in America where the main game, according to many cultural critics, is a competition to see who ends up with the most toys. Celebrities and other conspicuous consumers put before our eyes a dazzling display of things and experiences to savor. And before long we find ourselves turning into predators repeating the chant: I want, I want, I want. Underneath all of this is the fuel that feeds envy: comparisons. Why can't I have what that other person has?

This is the first of a series of books on "The Seven Deadly Sins" cosponsored by The New York Public Library and Oxford University Press. Others will include gluttony by Francine Prose, sloth by Wendy Wasserstein, and greed by Phyllis Tickle. Envy is probed by the inimitable essayist, short story author, and novelist Joseph Epstein whose latest book Snobbery: The American Version was a New York Times bestseller. He thinks that envy has been around since Cain and will continue to exert considerable power over human beings for years to come.

Epstein looks at what various philosophers and moralists have said about envy, compares the ways men and women express it, comments on its appearance in literature and plays, ponders its prevalence in academia and in the arts, examines its role in anti-Semitism, compares it to jealousy and resentment, and ponders its sway in different political systems. One of the most interesting dimensions of this exploration of envy is his response to a person who says that he is an enviable person since he is doing what he loves to do and has achieved success and fame at the same time.

In the end, Epstein concludes: "Whatever else it is, Envy is above all a great waste of mental energy. While it cannot be proved whether or not envy is part of human nature, what can be proven, I believe, is that, unleashed, envy tends to diminish all in whom it takes possession. Wherever envy comes into play, judgment is coarsened and cheapened. However the mind works, envy, we know, is one of its excesses, and as such it must be identified and fought against by the only means at our disposal: self-honesty, self-analysis, and balanced judgment." Epstein treasures these virtues and puts them into practice in this fine book. 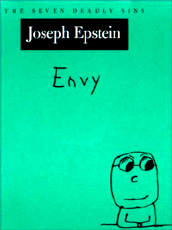