In America A Portrait of the Film

By Jim Sheridan, Kirsten Sheridan, Naomi Sheridan
The full screenplay with commentary by director Jim Sheridan and his daughters Noami and Kirsten.

This Newmarket Pictorial Moviebook contains the full screenplay for In America along with 70 full-color photographs. Director Jim Sheridan (My Left Foot, In The Name of the Father) wrote this drama of resilience with his daughters Naomi and Kirsten based on their own experiences of coming to live New York City in the 1980s. Like the characters in the film, they had very little money and were burdened by a family tragedy, the death of Jim's brother Frankie. The daughters talk about their memories of this time and their feelings about telling their story for the screen.

Sheridan has said about In America: "The film is ultimately about wonder. It's about trying to see the world with a kind of child-like, magical quality. It's a view of Manhattan as an island of dreams that helps a family rediscover their deep bonds. I also like to think of it as a love poem to my wife and kids."

This resource contains biographies of the filmmakers and actors, along with the full cast and crew credits. There is also an interview by Annette Insdorf with the director. 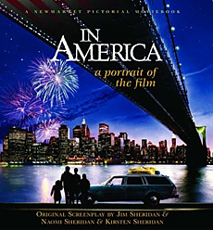