Elephant House or, The Home of Edward Gorey

By Kevin McDermott
Challenges us to savor our home as a sanctuary, a museum, a playground, and a workshop.

"Edward Gorey was, artistically speaking, a thin man who cast a fat shadow," notes John Updike in his foreword to this immensely appealing collection of photographs and commentary on the home of the popular creator of humorous stories and pen-and-ink artwork. Following Gorey's death in 2000, Kevin McDermott, a graphic designer and performer who appeared in his musicals, was given permission to photograph "Elephant House" where the artist lived for the last 21 years of his life. This beautifully designed volume contains a mix of black-and-white and color photographs that take us through this house, room by room. Also featured are 14 never-before-published elephant etchings and drawings.

For creative souls who are often very private, home is at once a sanctuary, a playground, a museum, and a workshop. It holds insights into the true nature of the person. Edward Gorey's Cape Cod home is all of that and more. Why did the artist call his residence "Elephant House?" McDermott answers: "Perhaps it was inspired by the size of the house, or the exterior wooden shingles, which for many years were gray and crackled like elephant skin. Yet it seems a more whimsical explanation is the most likely. When Edward first toured the interior of the house he discovered, in an upstairs bathroom, an antique white porcelain toilet shaped very much like an elephant. In typical Edward fashion, he had the bathroom removed but saved the toilet, later incorporating it into the design of an end table." In the kitchen, a piece of driftwood in the shape of an elephant's head was placed above the entrance door.

In an interview given in 1992 in the New Yorker, Gorey said: "The house really does need an awful lot of work, and if I got a large sum of money I would have it all fixed up — though I'm not sure I would have much of the inside fixed up more than it is. I rather like decay. I'm a little reluctant to take out a mortgage. Being free-lance, you never know." This artist was an inveterate collector, and his home housed many wonderful gatherings of cherished objects: old wooden potato mashers, blue glass bottles, Day of the Dead figures interspersed with old teapots, frogs lined up against a wall, a kitchen counter collection of rocks, painted eggs, salt and pepper shakers, stuffed animals. In the back room on the first floor of the house, which he called "the Ball Room," he kept a collection of small glass, stone, wood, and composition balls. Gorey loved books, and his library consisted of an estimated 25,000 volumes. He loved mysteries, Japanese literature and the works of Carl Jung.

Paging through this volume, one realizes that each room of this creative soul's house contains a mythic universe. Things meant a lot to Gorey, and after reveling in the way he treated them, we are compelled to cherish the objects in our own homes. Near the end of the book, there is a snippet from an interview in which Gorey is asked, "What or who is the greatest love of your life?" His response: "Cats." "If you were to die and come back as a person or thing, what do you think it would be?" His response: "A stone." The final question: "What is your favorite journey?" His response: "Looking out the window." 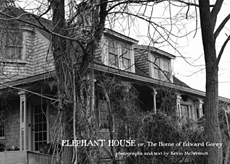