By Mira Nair
The official tie-in book with the movie.

"Vanity Fair had been one of my favorite novels from my Irish Catholic boarding school days in India . . . Upon re-reading the novel in the peace of my tropical garden, what I loved about it most was that the chief character was the world. That is what lent itself to my particular carnivalesque sensibility," writes Mia Nair, the director of sixteen films including Salaam Bombay, Mississippi Masala, and Monsoon Wedding. This pictorial moviebook starts off with e-mail correspondence between the director and screenplay writer Julian Fellowes (Gosford Park) on the best ways to bring out the multidimensional themes of William Makepeace Thackeray's 400-page 1847 novel which includes glimpses of poverty in London, lavish country houses, high society gatherings, and the battle of Waterloo. They discuss character development, casting, location shooting, and their ideas on expressing the satirical elements of the novel.

Nair says of the main character, played by Reese Witherspoon: "Becky Sharp is one of the greatest female characters written in literature, and Reese has wit, intelligence, guile and that enticing quality called Appeal that makes an actor a movie star. Becky Sharp is a complicated character. I wanted to preserve her complexity, her ambition, her folly, yet I wanted to work with an actor like Reese who is just plain irresistible to watch." This volume contains interviews with stars Reese Witherspoon, Gabriel Byrne, Rhys Ifans, and the creative crew responsible for bringing nineteenth-century English society to life.

The moviebook contains the screenplay and over 140 production stills, on-set photos, and drawings. There is also a fine piece on William Makepeace Thackeray who once wrote: "Which of us is happy in this world? Which of us has his desire? Or having it, is satisfied?" This query is at the heart of Vanity Fair — thought-provoking and dramatically engaging depiction of the shadow side of yearning. 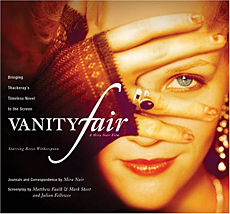