By Wendy Buonaventura
A fascinating overview of this phenomenon.

"Women have long been assumed to reveal their true nature through their bodies, and aside from giving birth this is most in evidence when they dance. According to many historians and other commentators, the main purpose of dance is either to stimulate sexual appetite or act as a substitute for sex. At different periods throughout history, dancing has been banned by governments who feared its potential as a source of social chaos.

Professional dancers have been seen as the most dangerous of all women, a reflection of the idea that men are powerless to resist temptation when it is put on display," writes Wendy Buonaventura, an author, dancer, and choreographer who has performed and lectured extensively throughout Europe and the United States. In this fascinating book, she covers dancing women from Salome to Madonna. Those doing the can-can in Paris caused an uproar because they revealed their knickers, and even the waltz was considered scandalous when it first hit polite societies in Europe. Colette's career as a dancer hit high stride when she kissed her female lover on stage, and in Argentina, tango dancers were considered to be tutors in the art of seduction.

According to Buonaventura, Isadora Duncan was "a revolutionary who offered up sensual expression of the body as a cultural endeavor" and "forced open the prison door of Puritanism, letting in light and liberation and a new way of thinking about women's experience and their lives as artists." The Puritans were only a few of the many religious people who have attacked women dancers over the centuries for lasciviousness. In Africa, women have danced joyously as an expression of the yearning to connect with the soul. Ecstatic expression continues in our time with trance dancing. Buonavnetura also covers ballet dancers, Josephine Baker, and Egyptian dancers. She concludes with a vignette about a flamenco dancer in her seventies who was still very passionate on stage. The author shared her enthusiasm about the performance and the dancer replied, "Let me tell you a secret, my dear, when you dance, there is no such thing as old age." 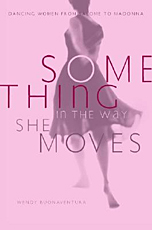