The Death of Innocents An Eyewitness Account of Wrongful Executions

By Helen Prejean
Makes a good case against capital punishment and for the positive value of compassion.

Sister Helen Prejean is the author of Dead Man Walking which was nominated for the Pulitzer Prize and made into a poignant Oscar-winning movie. This member of the Sisters of St. Joseph of Medaille travels extensively, giving on average 140 lectures a year, seeking to ignite public discourse on the death penalty. She has vowed: "I know I will do this work until every gurney and electric chair and gas chamber sits behind velvet ropes in museums the way auction blocks and bills of sale and bullwhips and other memorabilia of slavery are on display in museums today."

The idea that a wrongful death can be set right only by killing the perpetrator has been a dominant one in the religious, political, and legal discourse of this country for the past 25 years. There is an alternative, and it is spelled out in this cogently argued volume.

As a spiritual advisor, Sister Prejean has accompanied five men to their deaths. Two of these, she contends, were innocent. She tells the story of Dobie Gillis Williams, a poor black man from rural Louisiana with an IQ of 65 who was executed in January 1999. This amazing account of injustice demonstrates the importance of the accused getting a decent defense. Shortly after his death, the Supreme Court ruled it unconstitutional to kill a man so mentally disabled.

In the other case, Joseph O'Dell was arrested for the murder and rape of Helen Schartner in 1985. His death sentence came mainly as a result of the testimony of a jailhouse snitch. Even though O'Dell sought DNA testing on forensic evidence for 12 years, the courts refused to honor his pleas.

Sister Prejean discusses some of the reasons why so many innocents end up on death row: poor defense counselors, prosecutors who coach or intimidate witnesses, suppressed exculpatory evidence, outrageous testimonies of jailhouse snitches, falsified police reports, or manipulated information given to the media. To date, 117 wrongly convicted persons have been released from death row. Pope John Paul II personally intervened pleading with governors to spare the lives of certain individuals facing death, but he never made a categorical statement against the death penalty. The subject was not even brought up in the Pope's last four visits to the United States when he spoke of "pro-life issues" — abortion, euthanasia, and physician-assisted suicide. It was only recently, that the 55 U.S. Catholic bishops issued "A Good Friday Appeal to End the Death Penalty." Sister Prejean makes a good case for opposition to capital punishment and points to hopeful signs that more Americans are deciding against it. 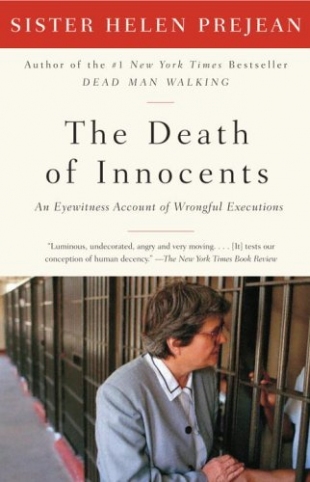