By Erik Kolbell
Challenges us to see ourselves in the actions and reactions of those surrounding Jesus during his last days.

In our review of Mel Gibson's controversial film The Passion of the Christ, we included a meditation based on the stations of the cross in which we asked readers to empathize with those around Jesus including his frightened disciples who abandoned him, the Roman soldiers who tortured him, and the loyal and devoted women who watched him suffer and die. In light of all the anger and disagreements about the movie, we thought that this approach would speak to both progressive Christians and their more conservative brothers and sisters and perhaps even build some bridges between them. We don't know how well this approach worked. But we are happy now to find a kindred soul in Erik Kolbell, author of What Jesus Meant: The Beatitudes and a Meaningful Life, winner of a Spirituality and Health Award as one of the Best Spiritual Books of 2003.

Kolbell is a freelance writer, psychotherapist, and former Minister of Social Justice at Riverside Church in New York. In this well-written Christian work, he finds in the story of the Passion some universal themes that speak to the hearts and minds of all people — guilt and forgiveness, compassion and injustice, cowardice and valor, loyalty and betrayal, and "the awesome power of life to prevail over death." Kolbell challenges us to identify and empathize with the varied characters mentioned in the biblical account of Jesus' last days. There are chapters on the woman who anointed Jesus' feet, the slave who was attacked and then healed in the Garden of Gethsemane, Caiphas, Peter, Judas, the mob calling for the execution of Jesus, Simone of Cyrene, the good thief, Jesus' mother Mary, the centurion, the women of the cross, Joseph of Arimathea, Cleopas, and Thomas. Kolbell states: "The Passion is the story of one person with echoes of many, and while I stand in awe of the one person who laid down his life for me, I stand in sympathy with those around him, because in their stories I so readily see my own."

The author has great respect for the woman who anointed Jesus' feet with precious ointments and sees her act of love as one of deep reverence. We need to always be on the alert for such acts of selflessness: "We are a nation that accords greater status to the movie stars who entertain our children than to the school teachers who educate them. This America of ours, of neon and asphalt, of strip malls and e-baying, of fast foods and sit coms and 'reality' shows, does not readily lend itself to the kind of introspection that draws us closer to God. So on a given day we might, say, find ourselves in a hospital or a synagogue, a mosque or maybe a prison or a food pantry, and be moved to tears by an act of breathtaking kindness in which God's love peeks through the pollutions of everyday life."

In his examination of the incident in the Garden of Gethsemane where Peter impulsively cuts off the ear of a slave, Kolbell finds another act of unexpected kindness and uses it as a meditation on the demonstration of God's love: "Jesus did not want to make the slave promise to become his follower. He did not even want to make him confess that he believed in God. He simply wanted to make him well. A gesture of wondrous promise and daunting challenge. His action is a promise, for it assures us that God's love leaves none of us behind; it unites all humanity in a way that is bigger than anything that might divide us. And it is daunting for exactly that reason — because it means that God's love extends to people we regard as our enemies or do not regard at all. It means that we must come to terms with the fact that God loves everyone — the mean-spirited, the stingy, the dishonest. It means that God loves the politician who abuses his power and the parent who abuses hers, the road rager and the drug-dealer, the pimp and the punk, He loves the smug and the self-centered, the inveterate criminal and the incurable racist. And, more to the point, Jesus' action means that we must decide what it means for us to sheathe the sword of self-righteousness and to love them too; to object to the people we find objectionable but to find it in our hearts to care about them as well."

Through two minor incidents in the Passion story, both about the spiritual practice of kindness, Kolbell inspires us to see afresh our connection with the woman from Bethany and then with the startled slave whose ear was healed. We are living in a time of widespread and divisive religious intolerance, the author notes. Christian denominations are being torn apart from within over sexuality issues, while liberals and conservatives seem unable to find a common ground beyond their theological disagreements. Perhaps this is the perfect moment for Christians to unite during Lent in a consideration of what people everywhere share with Peter, Mary, Simon of Cyrene, Judas, Thomas. and the women of the Cross.

Were You There? is a soul-stirring resource that is overflowing with stirring passages like those quoted above and down-to-earth illustrations of how God is working through all of us to establish his kingdom in our midst through our foibles, failings, and small acts of courage and conviction and compassion. We recommend this book as a wise spiritual companion for your Lenten journey. 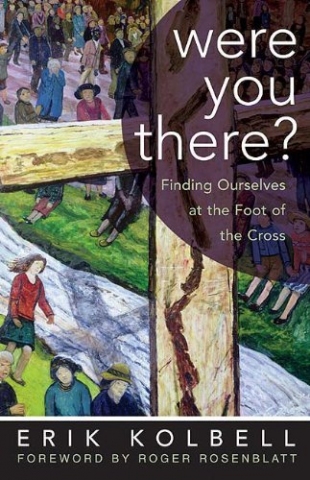