By Connie Zweig
A novel about how Rumi's life was transformed through his relationship with the wandering dervish Shams of Tabriz.

The thirteenth-century Sufi poet Jelaluddin Rumi is the most popular poet in America. A chief theme in his life and writings is a yearning for God. Connie Zweig, a therapist in private practice in Los Angeles, is the author of The Holy Longing. She has taught about the dark side of human nature, spiritual aspiration, and religious disillusionment. Al of these themes come into play in her first novel.

Zweig came to write the novel through a quest of her own. She had long loved Rumi's poems when she discovered him in her dreams telling her stories. She got some Farsi texts and learned that her dreams and details about Rumi's life and times were in sync with each other. Zweig also went to Turkey with a group of American Sufis, studied with a Mevlevi sheikh (the order founded by Rumi), and visited the site of Rumi's school and tomb.

The novel focuses mainly on the wild and weird encounter between Rumi and a wandering dervish called Shams of Tabriz, who had been waiting 40 years to find his true friend of God. Born in the land that is now Afghanistan, Jelaluddin spent many years in exile with his family. He was very close to his father, a sheikh, judge, and respected spiritual leader. When he died, a light went out in his life; this event was followed by the death of his first wife. In answering a question put to him, Rumi says: "Pain is our guide in everything. Until you ache for something, you won't strive to attain it. No doubt you know the story of Mary, mother of Jesus, whom we call the Prophet Isa. Wasn't it the pain of childbirth that brought Mary to the withered date tree, which became fruitful? The body is like Mary. Every one of us has a Jesus inside, but until the ache grows in us He is not born."

When Shams meets Rumi, he tells him to set aside his books and start on a new path, the path of the heart. This vagabond outsider becomes the face of God for Rumi and shakes him to the core. Shams teaches him: "We take about 22, 000 breathes a day. Repeat 'Allah' 20,000 times and it will burn away your thoughts. . . . Always come back to His name." They dance in the sema, the sacred turning that celebrates union with the Beloved. Rumi is bowled over by these teachings and begins writing poetry:

"Don't try to find love
by leaning on the cane of the intellect;
That cane is nothing
but a blind man's stick.

The Moth to the Flame does a fine job conveying the spiritual yearning that animated Rumi and Shams. It also reveals how this outsider brought to the surface the ancient clash between religion's adherence to tradition and spirituality's emphasis on unsettling mysteries and the inner life. Rumi eludes all categories and classifications and perhaps that is why he continues to have such a hold upon our imaginations. 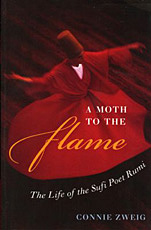