Where God Happens Discovering Christ in One Another

By Rowan Williams
Ways for Christians to grow in holiness and to be a place where God happens for others.

Rowan Williams is the Anglican Archbishop of Canterbury and is also a widely acclaimed pastor, theologian, and writer. His most recent books include The Dwelling of the Light and Writing in the Dust. In today's troubled world, it is often difficult to discern the presence of God. We can learn a lot about this process, says Archbishop Desmond Tutu in his foreword to this book, by turning to the Desert Fathers and Mothers who established monastic communities in Egypt, Syria, and Palestine in the third and fourth centuries. They sought to "grow in holiness" and to live for God. In his introduction, Laurence Freeman, head of the World Community for Christian Meditation, claims that these "monastic oddballs" may indeed "hold a secret for our modern world that no economist, sociologist, politician or religious leader can match." This volume had its genesis in a presentation Rowan Williams gave at the John Main Seminar for 2001 in Sydney, Australia.

It is a widespread misconception that the Desert Fathers and Mothers fled to the desert to escape the world and all its follies. Listen to John the Dwarf:

" 'You don't build a house by starting with the roof and working down. You start with the foundation'

"They said, 'What does that mean?'

"He said, 'The foundation is our neighbor whom we must win. The neighbor is where we start. Every commandment of Christ depends on this."

By isolating themselves in the wilderness, these monastics were brought into closer contact with their neighbors. Wililams explains: "Insofar as you open such doors for one another, you gain God, in the sense that you become a place where God happens for somebody else." Think about that for a while. Each day we have many opportunities to become a place where God comes alive in another person's life because of our actions, words, or deeds. That is why kindness, compassion, and love are so central in the sayings of the Desert Fathers and Mothers.

Our natural impulse would be to wake someone up and even to harshly warn them to stay awake lest they face the wrath of God! Here Abba Poemen does just the opposite and in the process becomes a place where God happens for a sleeping brother.

"We love with God when and only when we are the conduit for God's reconciling presence with the person next to us." This is a secret for the modern world from the faraway past. Make a vow that today you will act and speak in such a way that you will become a place where God comes to life for somebody else. 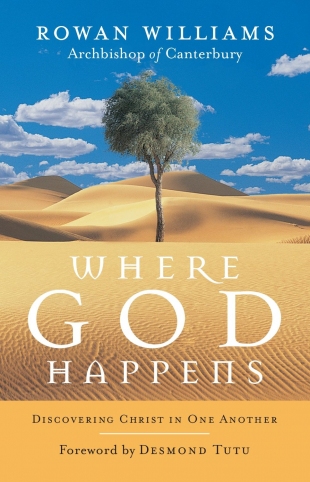